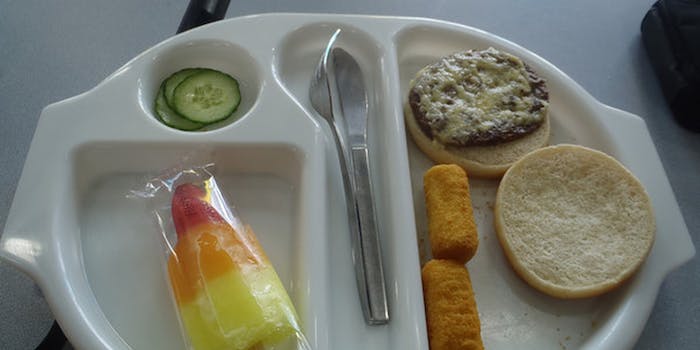 Children of the Internet age, listen carefully: If the grown-ups at your school aren’t doing their jobs right—like, say, if the cafeteria is serving cheap, unhealthy crap in lieu of the healthy stuff they’re supposed to feed you—try starting a blog. It just might be enough to change their minds.

Take the case of NeverSeconds, a blog by a Scottish 9-year-old Martha Payne. After we wrote about her on May 8, she managed to shame her primary school into offering larger, healthier meal options.

The site started as a writing project between Payne and her father. They chose the topic of school lunches—not because they considered themselves “foodies” or nutrition crusaders, but because school lunch was a topic she could write about every day.

At first, the blog entries mostly showed unappetizing, mostly processed food, and very small portions at that. (Payne later told the press, “The good thing about this blog is dad understands why I am hungry when I get home.”)

“Big news, I have gone viral! 105,000 people have visited my blog […]. Even bigger news my dad got a tweet from Jamie Oliver!  … I am really glad he looked in and it has put a smile on my face. I was a bit nervous going to school but everyone was great and I’m glad I haven’t upset anybody.”

Apparently she did upset a few officials at her school.

A school council spokesman told the BBC that, despite the blog’s claims of unappetizing and often-unhealthy meals, “Our school meal provision is fully compliant with nationally agreed nutritional standards.”

The spokesperson continued: “Young people make a choice from at least two meals and salad, vegetable, yoghurt and cheese options are available each day.”

Payne’s earlier blog posts gave no indication of such choices.

“Today was very different at lunchtime. Dad had already told me beforehand that some people from the Council were coming to lunch with a reporter from our local paper … I didn’t see the visitors having lunch but I saw them hovering about and watching us getting served.”

The attached photo showed the most appetizing meal to date. Payne noted: “For the first time ever I have seen at lunch cherry tomatoes, radishes, carrot and cucumber shreddings …. I liked most of the changes and I hope it will be the same tomorrow.”

By May 17, Payne’s father met with school officials. They told him that, henceforth, children would be offered unlimited salad, fruit and bread in addition to their regular menu choices.

Cafeteria people, the days when you could feed your students mystery meat and vegetable slime—secure in the knowledge that their complaints would be dismissed as “Kids being picky eaters”—are over.