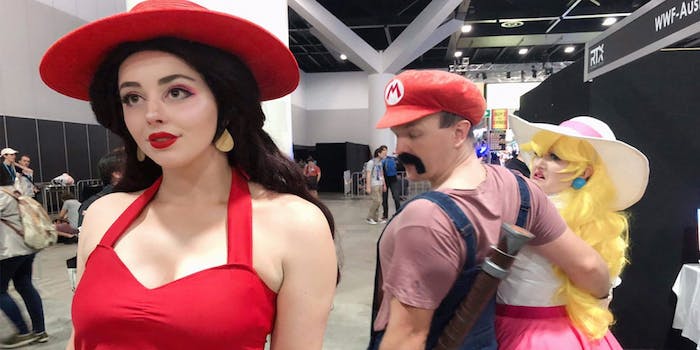 This Mario cosplay version of the ‘distracted boyfriend’ meme is fire

'When your ex gets in a mainstream game.'

The internet is still not done with the “distracted boyfriend” meme. Three cosplayers decided to recreate the meme in Mario cosplay, adding the caption “when your ex gets in a mainstream game.”

This version of the meme is FIRE—and internet agrees.

The original meme, which took over the internet in 2017, shows a man distracted by an attractive woman while his girlfriend looks at him in disgust. It’s the meme that just keeps giving, in part because any of the original characters can be substituted for just about anyone—or anything.

The Mario version of the meme plays on Mario’s relationships with Princess Peach and Pauline, who were both damsels in distress that Mario rescued in various games. But if we’re basing the romantic connection off of Super Mario Odyssey, neither seem to be interested in the ex-plumber protagonist.

Pauline, the original damsel in distress in Donkey Kong and mayor of New Donk City in the recent Odyssey, plays the part of the attractive woman in her signature red dress, while Mario is the “distracted” boyfriend. Princess Peach gives him that “wtf” look everyone has come to love.

Since Pauline’s revival as a prominent character in Super Mario Odyssey, fans have shipped her with Mario and questioned the relationship of the trio.

In a recent Q&A YouTube video published by Nintendo, Super Mario Odyssey producer Yoshiaki Koizumi was asked to describe the relationship between Mario, Peach, and Pauline.

“I would appreciate it if we could respect the privacy of those three at this time,” he said.

Although Koizumi didn’t confirm or deny anything, Peach should be careful, because the Pauline may be out to steal her man.