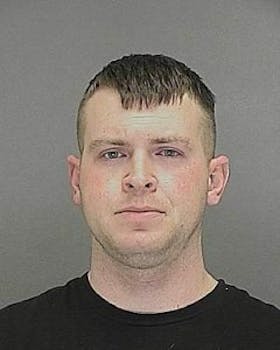 Marine recruiter accused of using Facebook to get nude photos

Sgt. Andrew Curran has been accused of using a recruit's Facebook account to obtain and distribute nude photos.

A Wisconsin Marine recruiter who worked at an office in Ashwaubenon has been jailed after police say an investigation revealed he used a recruit’s Facebook account to obtain and distribute photos of young girls.

According to authorities, Sgt. Andrew Curran, 27, of Green Bay, told a male recruit that he needed his email and Facebook information to conduct background checks. Then, say police, Curran logged in to the account and began contacting the young man’s female friends and asking them for nude photos. Posing as the recruit, Curran allegedly asked the young women for their email addresses and passwords, telling them he was at boot camp and couldn’t access his own account. Normally at basic training, recruits are prohibited access to the internet at all.