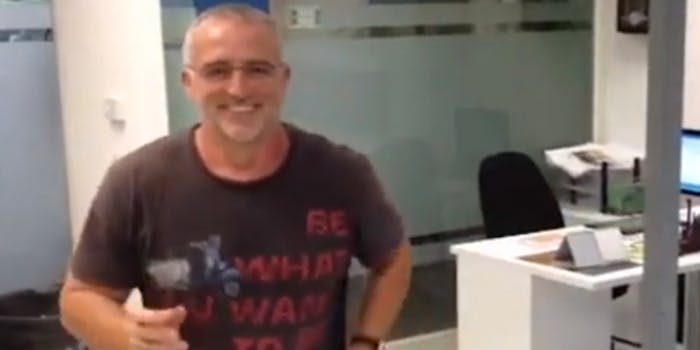 The ‘I Quit’ girl gets a perfect video job offer

Marina Shifrin’s wildly viral “I Quit” video, in which the young dancer/technophile quit her job at folk-famous Taiwanese news animation studio Next Media Animation, has earned adoration, scorn, and mostly popularity. Turns out it’s also earned her a fancy new job—if she wants it.

On Wednesday, Y&R Israel, a division of Young & Rubicam, one of the largest marketing and communications agencies in the world, took to YouTube with yet another rendition of the dance-to-Kanye’s-“Gone”-on-YouTube template Shifrin’s made so popular this week. Unlike Shifrin’s old bosses, however, who jabbed at her quitting and implied that she was making a stupid mistake by leaving the company, the individuals at Y&R Israel invited her to come join their team.

“We heard that you quit your job, and we thought you may need a new one,” the video’s captions read as employees dance and hop around the office. “We work for an amazing international advertising agency. There are more than 50 restaurants within walking distance.”

The company claims employees can bring pets to work—and even their relatives.

“It’s time to leave Taiwan and make ‘Aliyah,'” they say, referring to the immigration of Jews from any type of diaspora towards Israel. “Hebrew lessons are on the house.”

“THIS. IS. AMAZING,” she tweeted shortly after seeing the video, which right now has fewer than 2,000 views. “It made me smile so hard and it looks like you only employ supermodels? Gah! I love Israel. Shalom!”