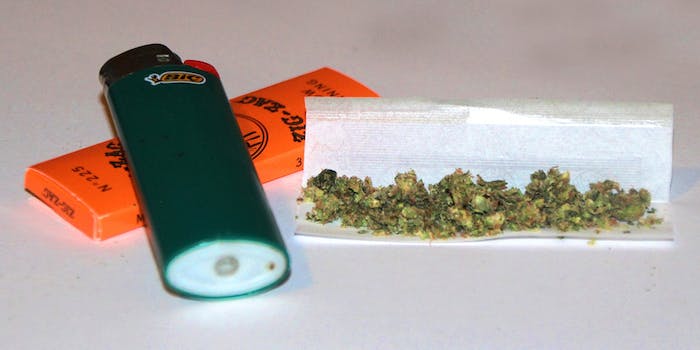 Just do it already.

The dutchie has officially been passed to the Buckeye State—but it can’t smoke just yet.

Marijuana legalization proponents have successfully placed a measure on the November ballot, giving Ohio voters a key opportunity to vote up the green-up. The state’s laws only go as far as to decriminalize minor possession of cannabis, with a fine of $150 for carrying less than 100 grams. Anything more, and the fines and incarceration times get even more steep.

In the age of the Internet, where new networks and apps facilitate the purchase and recreational usage of marijuana—as Daily Dot contributor S.E. Smith highlighted—it’s now easier than ever for people to get their hands on a bag of green. In the days following the Ohio news, more than 3,000 tweets on the matter signal some early buzz, according to social analytics tool Topsy. Regardless of the laws on the books people will still take risks to access marijuana, something public policy can only control so much. But decriminalization, in its current form, is a complete farce.

True decriminalization would mean no fines and no prison time for personal, private use of marijuana. Most decriminalization laws, like the pending measure in Illinois, don’t go far enough to stop punishing people for (responsibly) cultivating, carrying, or using a controlled substance that, in itself, is harmless. And it’s time for states to take the next step: Legalize weed.

So far only four states have legalized both the recreational and medicinal uses of marijuana: Colorado, Washington, Oregon, and Alaska. More than 20 other states have some variation of decriminalization or legalization for specific medical purposes. But in the vast majority of the United States, selling, being in possession of, and growing marijuana remains illegal, carrying either misdemeanor or felony penalties, according to the National Organization for the Reform of Marijuana Laws.

Ohio will be perhaps the biggest statewide battle yet for marijuana legalization. In each national election of recent memory, the Buckeye State has been a go-to battleground state, given its dynamic voter makeup. With multiple progressive or Democrat-leaning urban centers and robust conservative hubs, the state isn’t so much “red” or “blue” as it is purple. The same could be said for states such as Pennsylvania and Florida, both of which have yet to take marijuana up for a statewide vote.

Ohio will be perhaps the biggest statewide battle yet for marijuana legalization.

That said, Colorado—a state that’s helping lead the way on legalization—is typically considered a swing state, even more so in the past two elections. As Nate Silver noted in his 2012 post-election analysis at the New York Times, Obama’s nearly five percent margin of victory in the the Centennial State proved pivotal to him winning the Electoral College and, thus, the presidency.

Silver’s election results chart also shows a razor-thin margin of victory for Democrats in Ohio, and even thinner in Florida—1.9 points and 0.6 points, respectively.

As the Guardian reports, at least three other states are lining up similar ballot measures for the 2016 general election: Massachusetts, and two border states, California and Arizona. More states could follow.

According to an April 2014 report from Pew Research Center, 54 percent of Americans support legalizing marijuana.

“Organizers in Nevada have already qualified for the 2016 ballot, while elsewhere they continue to gather the necessary signatures,” writes the Guardian’s Scott Keyes. “Polling, though early, is generally positive for reformers, with surveys in California, Massachusetts, and Michigan showing voters in favor of legalized marijuana.”

Opinion polling has also swung in favor of legalization proponents. Even though President Obama has come out only in favor of decriminalization—a moderate-to-conservative stance—public sentiment has changed drastically in recent years, owing in part to the momentum of legalization wins from 2012. According to an April 2014 report from Pew Research Center, 54 percent of Americans support legalizing marijuana—but there’s some tension when that’s broken down to types of usage.

Attitudes on full legalization aside, the element of criminality is largely lost on voters. Now 67 percent believe drug policies should shift away from prosecuting drug crimes to providing essential treatment resources.

In other words, locking people away for carrying or selling drugs doesn’t address the root cause of drug-related offenses—issues that aren’t intrinsic to the drugs themselves as much as they are to other human struggles: poverty, education, mental health, substance abuse, and more. But who’s to say that someone using marijuana isn’t enjoying it as much as they would a cigarette or a cocktail—two addictive drugs in their own right?

Moving to only decriminalize, and not fully legalize, marijuana, doesn’t acknowledge the humanity in the discussion. Aside from recreational usage, marijuana has been heavily regulated as part of the ongoing War on Drugs, unnecessarily burdening the courts and law enforcement agencies, and spending millions of dollars to crack down on relatively petty offenses.

Locking people away for carrying or selling drugs doesn’t address the root cause of drug-related offenses—issues that aren’t intrinsic to the drugs themselves as much as they are to other human struggles.

In Illinois, where a decriminalization bill hangs in the balance, it’s a problem that Cook County State’s Attorney Anita Alvarez attempted to remedy as much as she could: by announcing in May that her office wouldn’t prosecute minor possession cases for anyone with less than three arrests or citations.

But criminal records that often result from lower-level drug busts compromise the ability to secure employment and disproportionately affect vulnerable populations. As Business Insider reported last year, marijuana was sold in pharmacies in the 19th century, but only became illegal in the 1930s after an influx of Mexican-American immigrants popularized its recreational use.

The “dangerous precedent of racial control,” as historian Richard Miller said on This American Life, had a particularly harsh impact on black Americans. “A hundred years after America passed its first drug laws, blacks still make up a disproportionately high number of prisoners,” Business Insider’s Erin Fuchs wrote. “Black prisoners make up 38 percent of the prison population but make up just more than 13 percent of the U.S. population.”

That’s notwithstanding the fact that black and brown people are already much more likely to be stopped by the police than their white counterparts—meaning it’s more likely for them to face drug-related charges.

The debate shouldn’t be about whether or not it’s OK to use, sell, carry, or grow small amounts of marijuana—rather, it needs to be about creating an environment of honesty and responsibility around controlled substances.

Legalization or not, people will still take risks to access marijuana, something public policy can only control so much.

Throwing the book at marijuana enthusiasts, in the end, helps no one. Although decriminalization measures attempt to remove some legal hurdles, they still enable law enforcement to continue sanctioning cannabis—a relatively harmless controlled substance—and the people who use it. Now is the time to boldly move toward legalization, and eliminating excessive government oversight once and for all.

Photo via Heath Alseike/Flickr (CC BY 2.0)