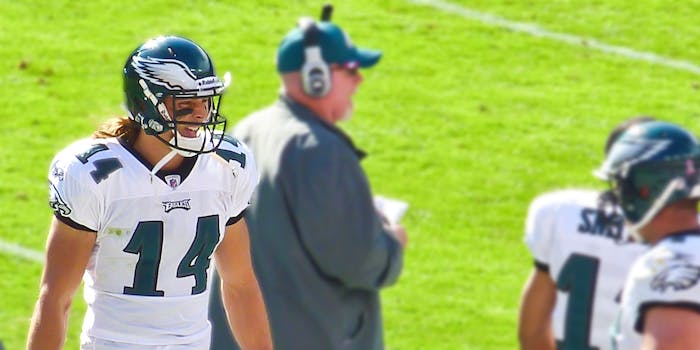 After Cooper was caught using a racial slur, Marcus Vick offered $1,000 to the first player to "light his ass up" on the field.

This season, Philadelphia Eagles wide receiver Riley Cooper is in for a world of pain unlike anything he’s ever experienced on the field.

Cooper, 25, has become the most reviled player in the NFL after a cell phone video of him muttering “I will fight every ni**er here” at a Kenny Chesney went viral Wednesday. It has collected 1.1 million views and counting.

Cooper, who is white, has since been slammed in the media and on Twitter, where he’s been mentioned more than 107,000 times over the past 24 hours. Cooper issued an apology Wednesday and stated on Twitter that he would accept any consequences for his actions. So far, those consequences have included an undisclosed fine from the NFL (which could be as much as $37,000) and sensitivity training. They may also include a beatdown of epic proportions.

Late Wednesday evening, the brother of Eagles quarterback Michael Vick offered up a $1,000 reward to any opponent who “lights [Cooper’s] ass up” on the field. Marcus Vick made the offer on Twitter, where it was retweeted 2,300 times before he deleted the message.

Michael Vick was much more lenient toward Cooper. “As a teammate, I forgive him,” he said. “I know what type of person he is. That’s what makes it hard to understand but easy to forgive him.”

Threats of violence are nothing new on Twitter. Politicians, actors, and and even a teenage fan of Justin Bieber have all had their lives threatened for no apparent reason. Twitter is working on a “report button” system to combat the problem.

Meanwhile, if Cooper is still looking for a fight, there are plenty of people willing to take him up on it, either on the field or off.