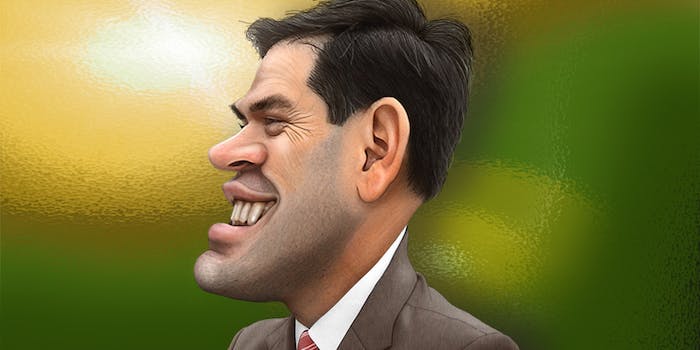 Political blogs suggest the Florida senator has a jump on his opponents, but he's far from a safe bet.

If the recent polls are to be believed, Sen. Marco Rubio of Florida is all but guaranteed to be the Republican presidential nominee in 2016.

The Hill, a prominent Beltway blog, reports that Rubio is besting his Republican challengers in two different early polls, one from Fox News and the other from Quinnipac University. According to Fox, 13 percent of surveyed Republicans plan on voting for Rubio, while Gov. Scott Walker of Wisconsin trails with 12 percent. The Quinnipac survey tallies Rubio with 15 percent, with Jeb Bush next at 13 percent.

Considering Rubio only recently announced his candidacy, his lead might feel like it came out of nowhere, but pundits are hardly surprised. “Barring a massive strategic blunder, Marco Rubio is well-positioned to become the Republican nominee for President in 2016,” writes Sean McElwee of Salon. “The Florida senator is the ideal candidate to expand the Reagan coalition while holding on to the conservative base and he can take shots at Clinton that would sound hypocritical coming from Bush.”

George F. Will echoed this sentiment at RealClearPolitics, arguing that “all eyes are now going to be turned to [Rubio] as a man who might have a way to broaden the demographic appeal of this party.” Charles Krauthammer of the Washington Post agrees, describing Rubio as a “fresh, young, dynamic persona” and “a powerful counterpoint to Clinton fatigue.”

Although these experts suggest Marco Rubio can parlay this early momentum into a nomination (and possibly a win next November), it’s far from a done deal. Here’s why the experts are wrong about Rubio:

1) He doesn’t have strong grassroots support

Although Marco Rubio was elected to the Senate thanks in large part to a vigorous grassroots campaign on the Internet that mobilized the Tea Party on his behalf, it is unlikely that he could rely on similar enthusiasm from right-wing activists in 2016. His support for the Senate immigration reform bill in 2013 caused a major backlash from the GOP’s conservative base.

While it has been forgotten for now, it’s inconceivable that Rubio’s opponents won’t remind primary voters of their earlier outrage if Rubio emerges as the official frontrunner. His subsequent flip-flopping on the issue won’t help him either; for Tea Partiers, the only thing worse than an insufficient conservative is an insincere one.

Making matters worse, Rubio has done little to distinguish himself in the Senate, which provides him with little aside from his charismatic persona and potential demographic appeal to lure primary voters. This is reflected in how, despite having a strong online movement backing his candidacy during the 2010 Senate race, Rubio hasn’t shown any of the trendy hashtags or comparable signs of viral support that other 2016 candidates (e.g. Hillary Clinton, Rand Paul, Ted Cruz) have enjoyed.

From the standpoint of winning in a general election, Rubio’s Cuban heritage is a major advantage: Hispanics are the fastest-growing voting bloc in America, and it is no coincidence that the only Republican to win the popular vote in the six presidential elections from 1992 to 2012 was also the one who did best among Latino voters. George W. Bush picked up at least 40 percent in 2004 thanks in part to his support for moderate immigration reform.

Unfortunately for Rubio, the racist leanings of the Tea Party and other right-wing voters has been well documented, from polls by the New York Times and Bloomberg to an in-depth scientific study conducted in 2011 by the University of Washington.

While this hasn’t stopped Hispanic, African-American, and other minority politicians from being nominated with Tea Party support in various legislative and gubernatorial contests, the same voters who have overtly or secretly resented having a non-white president since January 2009 may balk at choosing a Hispanic in 2016.

3) The statistics are misleading

To understand why Rubio’s current lead in the polls is overstated, let’s compare the numbers for the top five candidates in each party as of April 24:

Not only does Clinton have a five-to-one advantage over the immediate runner-up, but she has more support than every other Democrat combined. Rubio’s lead, by contrast, falls well within the margin of error. Indeed, the same number of voters backed Other, None of the Above, and Unsure (13 percent) as voiced support for him.

While Clinton’s lead is one-sided enough to clearly demonstrate that her support is both wide-spread and deep, the diffuse nature of how support is being distributed among the Republican field reveals that it’s anyone’s game.

As Fox News has already noted, it’s easy to disparage Rubio as being another Barack Obama. Both were youthful one-term senators better known from their eloquent speechmaking than their legislative records, which were relatively paltry when they threw their hats into the presidential ring.

Much as a Ted Cruz nomination would open Republicans to charges of hypocrisy on their use of the birther issue, so too would a Rubio nomination leave the GOP vulnerable to charges that they’re simply trying to elect a President Obama of their own.

5) He will compete with Jeb Bush and Scott Walker

While hailing from Florida should give Rubio an advantage in winning that state’s electoral votes in the general election, he will have to compete with former Gov. Jeb Bush during the primaries, and Bush has a Mexican-American wife.

Perhaps more significantly, as Harry Enten of FiveThirtyEight noted, “Rubio’s path to the GOP nomination…looks a lot like [Scott] Walker’s,” as both men appeal to the traditional party establishment. Because neither Rubio nor Walker have the same support among moderate and liberal Republicans as Jeb Bush, both men will need to co-opt most if not all of the support currently going to their counterpart in order to win the nomination.

If Rubio and Walker split conservative and establishment Republican support between themselves during the primaries, historical precedent and existing data both indicate that neither will marshall enough support to stop Jeb Bush from being nominated.

The bottom line is simple: Rubio’s past support for immigration reform, lackluster Senate record, and vulnerability to racial prejudice make it unlikely that he will be able to overcome his soft support (i.e., being everyone’s “second choice”) and win the nomination. He may be electable, but so is Scott Walker, and Walker lacks any of the weaknesses among grassroots conservatives that will hobble Rubio. Meanwhile, Rand Paul has built one of the most impressive grassroots networks of any candidate in either party.