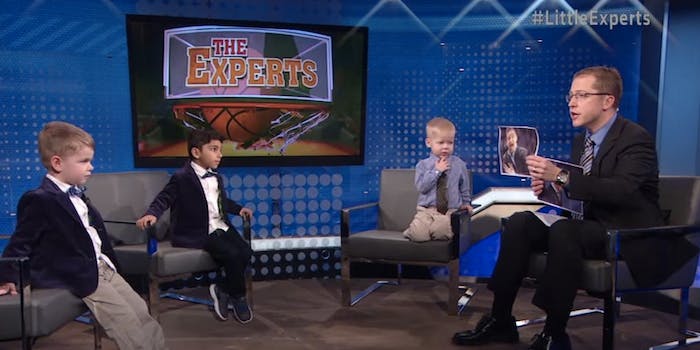 Their guesses are as good as any.

Have your March Madness brackets handy? It’s Darth Vader Stormtroopers for the win.

So says one of the Little Experts, a group of toddlers who appear on ESPNU with a knack for picking the winners when it goes to collegiate sports. Matt Schick plays the straight man for three young boys who say specialize in what essentially amounts to a series of hilarious non-sequiturs to sports-related questions.

Young Paxson accurately points out that the key to winning your office March Madness tourney is the cheerleaders. Coen says the Cinderella team in this year’s matchups will be his sister Tate. When it comes to selecting the sleeper team, things go hilariously off the rails when Paxson claims he sleeps really well after his mommy and daddy go to bed.

You have to hand it to these young experts, because they nailed it when they gave the raspberries and a huge thumbs down to a few of the mascots, most notably Spike the Bulldog from Gonzaga. They also know a thing or two about coaches, with bowtie-wearing Niam stating that Kentucky’s John Calipari is the best coach, and will win 180 games in the next several weeks.

It’s your choice to take these youngins seriously with their pearls of wisdom, but based on some of the bracketology making the rounds online, their guesses are better than most.