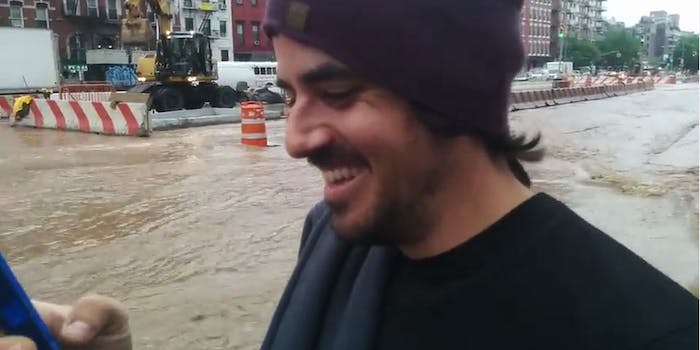 Katz’s never closes—even when a nearby water main bursts

The resulting sinkhole closed Houston Street through at least the remainder of the day.

A massive water main break this morning in Manhattan was documented on numerous YouTube, Vine, and Twitter accounts, updating the rest of the world as the dirty water continued to flow.

During the late morning hours of May 22, a lower Manhattan pipeline burst, turning the busy Houston Street into a river. Pedestrians wandering around near the site made sure to memorialize the rush-hour headache on social media.

A sinkhole just opened in the LES due to water damage from a water main break https://t.co/4Y2Djfi4Qq pic.twitter.com/42e11uUX1l

NYC drivers may want to avoid the lower East Side today. Water main break and sinkhole on Houston. Save the pastrami! https://t.co/7rwcbcO7La

The water flooded the basements of numerous properties, including that of the world-famous Katz’s Delicatessen. Fortunately for the deli’s die-hard clientele, the episode was a mere hiccup in the business day. Only a few deliveries had to be canceled; otherwise, the deli was open for business.

Katz’s is still open, despite the water main break. Just don’t try to drive on Houston for a while… pic.twitter.com/BNc6c8TtfZ

Water crews shut off the flow shortly before noon. The resulting sinkhole closed Houston Street through at least the remainder of the day. Officials have yet to estimate when the street will reopen, but it will certainly cause a headache as New Yorkers make their way out of town tomorrow for the Memorial Day holiday.