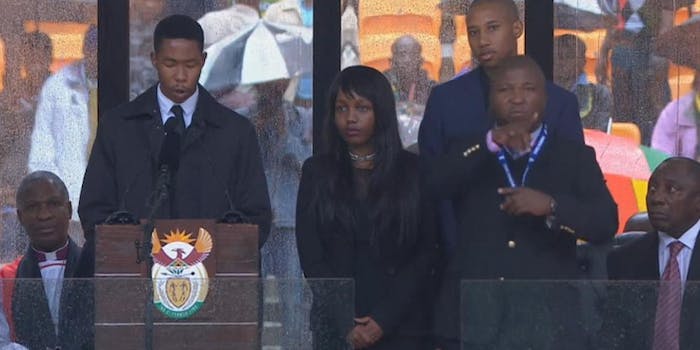 This guy at the Mandela memorial was doing something, but it wasn’t sign language

The Independent has interviewed three sign language experts and the national director of the Deaf Federation of South Africa.

While world leader after world leader took the stage at South Africa’s FIFA World Cup stadium to pay tribute to Nelson Mandela Tuesday, an unnamed man stood off to the side interpreting their words into sign language.

Only his gestures were total nonsense.

The Independent has interviewed three sign language experts and the national director of the Deaf Federation of South Africa. They all claim the man “was moving his hands around but there was no meaning in what he used his hands for.”

Wilma Newhoudt-Druchen, South Africa’s first deaf woman to be elected to its Parliament, also expressed her disgust with the translator on Twitter.

Shame on this male so called interpreter on the stage. What is he signing? He knows that the deaf cannot vocally boo him off. Shame on him !

The South African government hasn’t released a statement regarding the interpreter.