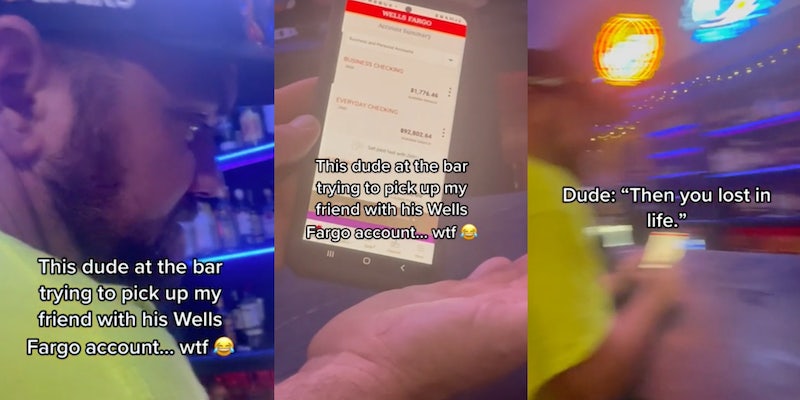 ‘You really think that is going to impress me?’: Man uses Wells Fargo balance to hit on woman at bar in cringe video

'This is the best example of cringe I’ve seen in a long, long time.'

A video of a man trying to use his bank account balance to win over women at a bar has been voted “cringe” in the r/Cringetopia subreddit.

Posted to the subreddit by u/PM_ME_GHOST_DICKS, the video shows a man with his phone out, showing a woman his checking account balance of over $92,000. However, things don’t go quite as planned. The woman he is trying to impress looks at the account balance, and says, “You really think that’s going to impress me?”

“The dude at the bar trying to pick up my friend with his Wells Fargo account… wtf,” text overlay on the video reads.

As the video continues, the woman he is trying to pick up says that she isn’t interested in money.

The man then replies that she has “lost in life.”

Commenters on the video suggest that the man just got a settlement payout, or has suddenly come into that much cash through another avenue.

“This feels like he just got a personal injury settlement payout and thinks ‘I’m rich now bitches,'” wrote u/WildAnt3968. “Everything about this screams ‘sudden cash’ for a person who’s usually financially unstable.”

Another commenter pointed out that the amount may not be enough to convince someone to give the guy a chance if they’re not already interested.

“It’s probably not enough to convince someone who isn’t interested in you to give you a chance (especially since it’s such a douchey move),” u/IAmPandaRock wrote. “I mean, maybe if it said something like $350,000,000, the woman might think ‘damn, he’s such a douche but that’s a ton of money… I guess I can see where this goes in the very near term… maybe we can go Paris for lunch!'”

Others simply remarked on how “lame” and “cringe” the clip is. “This is the best example of cringe I’ve seen in a long, long time,” one said.

It’s unclear where or when the video was filmed.

The Daily Dot has reached out the the person who posted the video to Reddit.