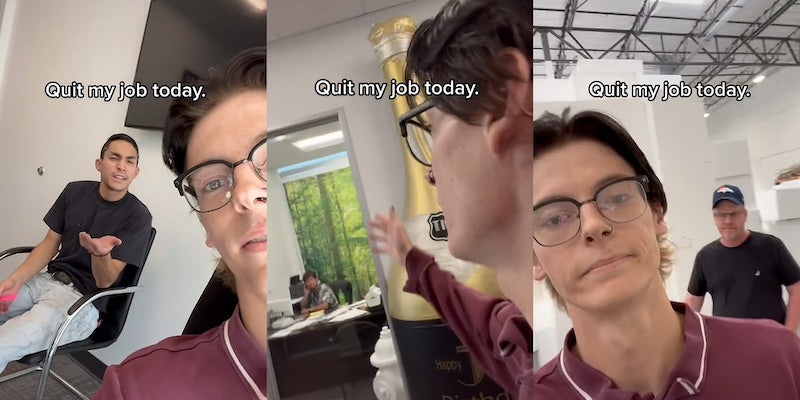 ‘He would talk sh*t about you all the time’: Man films himself quitting, turning his managers and co-workers against each other before leaving

'You always would call him a little bitch.'

A man filmed himself quitting his job and telling one of his managers that the other was “talking shit” about him before he left.

In the video posted by TikToker @beendead_ on Aug. 10, he sits in a conference room with his managers, who he informs that he is quitting. He turns to his manager on his left side, “John,” and says that he has “never had a problem” with him before confronting another co-worker for “talking shit.”

“You always had a problem with me, I don’t understand why. But I want to let you know that he would talk shit about you all the time,” he says, pointing to another co-worker off-camera. “You always would call him a little bitch.”

In the clip, the co-worker that @beendead_ claims was “talking shit” says that he was only “joking.”

“I would also like if you did have a problem to say it with your chest,” he says, addressing a manager sitting to his right. The manager then attempts to explain that he doesn’t have a “problem,” to which @beendead_ says he “doesn’t care” and reiterates that he is quitting.

As he gets up to leave the conference room, he addresses another co-worker in the neighboring office, “Dave,” to let him know that the others were “talking mad shit” about him as well.

The video has amassed over 143,000 views as of Tuesday, with commenters praising him for his decision to “stir the pot one last time.”

“LMAOOO dude stirred up the office as he was leaving,” one user wrote.

“This is so cathartic. Sorry about your terrible experiences. But thanks for allowing us to live vicariously through you in this,” another said.

Others said they wished they could do the same to some of their former managers.

“It would be a dream to say this to my old manager,” a commenter said.

“Everybody wish they can do this when they quit their job,” another wrote.

In a storytime, @beendead_ encourages viewers who “got inspired” by his video to quit their job if they aren’t happy.

“You only got one life. Do what makes you happy,” he says. “Another major vibe to get out of is the working vibe. You don’t want to be a worker ass ant your whole fucking life man.”

The Daily Dot reached out to @beendead_ via TikTok comment.