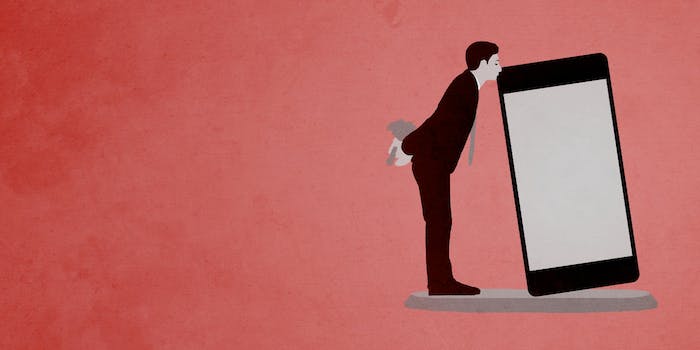 Till upgrade do us part.

Funny to think of how much time you’ve spent swiping through Tinder, hunting for a hookup who could become a soulmate, when all along your true love was right under your nose.

Yes, we’re all infatuated with our phones—but Aaron Chervenak of Los Angeles was willing to make a commitment to his beloved. So the next time you find yourself up late and reaching over to your handheld device for some casual, no-strings-attached fun, maybe consider taking that next step and making things Las Vegas official.

Michael Kelly, of the Little Vegas Chapel, where the happy couple took their vows, was intially befuddled by the nuptials, KTNV reported.

“At first it was like what?” said the Little Las Vegas Chapel owner Michael Kelly. “And then I was like… Alright let’s do it.”

“We don’t really have many people that marry inanimate objects,” he added. Photos of the stunt wedding also did not make it to the venue’s Elvis-impersonator-filled Facebook page.

While the union “isn’t legally recognized by the State of the Nevada,” again per KTNV, Chervenak clearly took advantage of the fact that the chapel will consecrate any commitment, even to an iPhone.

“We look to [phones] for solace, to calm us down, to put us to sleep, to ease our minds—and to me that’s also what a relationship is about,” Chervenak said in commenting on humanity’s ardor for technology.

No doubt they’ll live happily ever after. Until the next-gen model comes out.