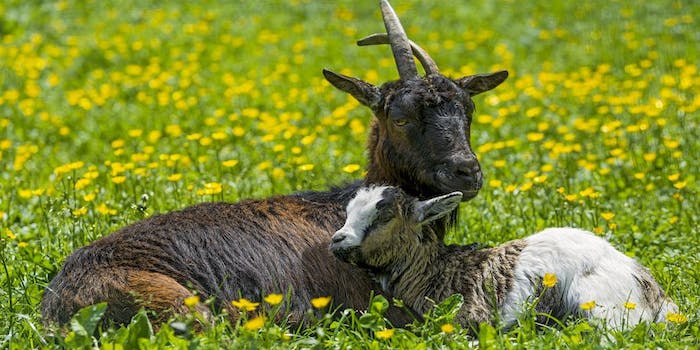 Man moves to Swiss Alps to live life as a goat

To know is not enough. One must be to reach true understanding. And for one goat enthusiast, the world of humans was a bore. To be a goat, however, was was to live.

British conceptual designer Thomas Thwaites made headlines recently when he shed himself of his worldly belongings to live among the goats in the Swiss Alps. The eccentric imagineer fashioned prosthetic limbs to walk with the herd and blend in for three days. “My goal was to take a holiday from the pain and worry of being a self-conscious being, able to regret the past and worry about the future,” he told Mashable.

Outlets from the Mirror to the New York Daily News have reported on Thwaites’ experience with his “fellow” billy goats in the Alps, but the Daily Dot was able to receive comment from a few members of the herd.

“He mostly kept to himself,” said Nigel, who appeared to be the alpha. He stroked his goatee with his hoof as he reflected. “Yeah, all of a sudden-like, this odd billy stuck around the outskirts of our herd. Not very fast, no.”

As the herd of goats scaled the rocky terrain of the mountains, Thwaites—who the other goats referred to as “Gruffenstein” on account of his hodgepodge of simulated goat parts—had to keep his distance or risk falling to his death. “We all just saw it as a bit of a comedy routine,” said Petunia, her rectangular pupils seemed to scan right through me. “I kept trying to see if there was a camera around. Like why on Earth would some clunky billy goat be hanging around speaking gibberish the whole way?”

Some goats weren’t so indifferent about Thwaites’ presence in the herd. Dewey remained skeptical. “What does this man want from us?” he asked. “Of course I question his bloody intentions. Were he really to want to be a goat, he’d stick around, eat the grass, take part in our actual customs. I’d have butt him right in the behind if I weren’t a righteous billy.”

Dewey’s skepticism may hold water. When reached for comment, Thwaites declined to offer any further insight to his life with the goats. “There’s a book of the project coming out in April, so I’m trying not to have any more publicity for now!”

We can only hope that the book proceeds will go to the well-being of the goats he betrayed. They were never friends to him, they were just a story

H/T Mashable | Photo via Tambako the Jaguar/Flickr (CC BY ND 2.0)