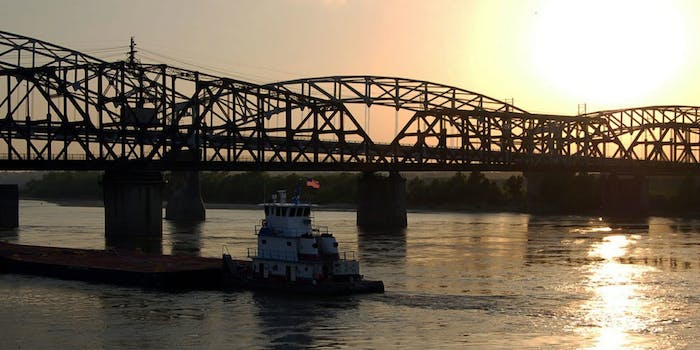 The suspect survived, but he was sore afterward.

When you’re trying to evade the cops, and they’ve got you trapped on a bridge, the only way you’re going to escape is to jump off that bad boy.

That, at least, is what this guy thought when the Kansas City police department was barreling toward him on the Broadway Bridge.

Take a look, courtesy of the Kansas City PD. At the 24-second mark of the video, the suspect, who looks to be about the size of an ant, rushes from his car to the bridge railing and then just leaps over it into the Missouri River.

To give you a sense of how high that bridge is…

It doesn’t look terribly tall—though it’s probably a bit different when you’re actually looking down on the water from the railing. In any case, it’s almost never advisable to actually vault oneself off any bridge.

The man’s courage and stupidity didn’t help him avoid charges. According to the Kansas City Star, 22-year-old Robert Joseph McGaugh faces a felony charge of resisting arrest. He has also been charged with driving with a revoked and suspended license and not having proper insurance.

When another law enforcement agency pursued a vehicle into our city on Oct. 7, 2015, our officers assisted by using stop sticks and staying behind the fleeing car. Then, the man stopped in the middle of the Broadway Bridge over the Missouri River and jumped off the bridge. Look toward the middle of the bridge at 0:24 (about 10:25:23 on the time stamp) and you’ll see him run out of his car and jump from the left side of the bridge. He survived the fall and made it to shore, where our officers worked with Kansas City Fire Department members to rescue him and get him to the hospital. He complained of overall soreness.