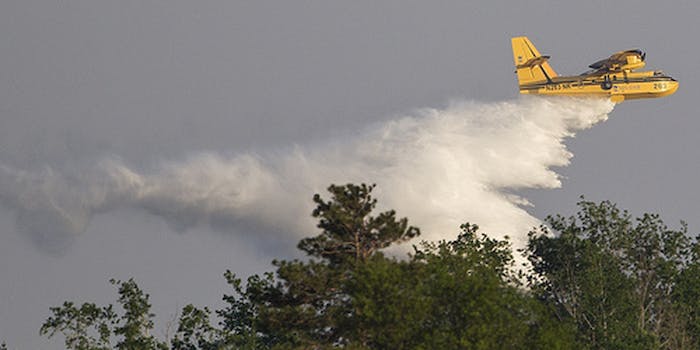 What's next—standing under a calving glacier?

Does philanthropy via social media make you dumb? Because it seems the ice bucket challenge—a viral fad meant to raise awareness of (and money to fight) ALS—is seriously lowering our collective IQ.

First there were your run-of-the-mill ice bucket fails. Then a guy who had skipped out on parole months prior was busted when video of him taking the challenge hit social media. Still, nothing could have prepared us for the latest idiocy: the Local reports that a Belgian man is recuperating in the hospital after he arranged for a firefighting airplane to drop 1,500 liters of water on him.

The 51-year-old “was rushed to hospital soon after receiving the water impact while standing at the Empuriabrava aerodrome in northern Catalonia, Spain.” Rolf Kuratle, head of Skydive Empuriabrava, explained that the stunt was indeed an outgrowth of the ice bucket phenomenon.

The pilot, a friend of the injured man, “flew a firefighting plane, the kind used to put out forest fires, and dumped the load onto his friend,” Kuratle explained. “They obviously miscalculated how much water it was,” he added dryly. No kidding: 1,500 liters (or 396 gallons) shakes out to some 3,300 pounds of water—enough to do real damage, as most humans could have guessed.

This has been your cautionary tale of the day: Never, ever do anything for charity.