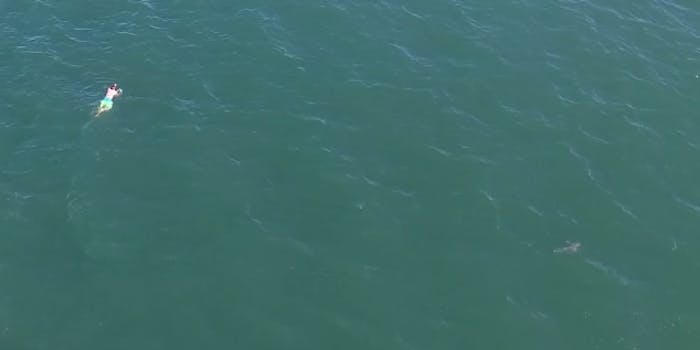 Man fleeing police tries to swim to safety, but he finds a shark instead

It was a pretty close call.

Even as desperate attempted escapes from the police go, getting chased by a shark makes for a particularly harrowing story. As detailed by WWAY earlier this week, a 20-year-old man named Zachary Kingsbury was pulled over by police in Surf City, North Carolina on a traffic stop, allegedly for the possession of “contraband,” when he took off running.

He reportedly fled to a nearby beach and started swimming away, causing the police to send out an aerial drone to follow him. And while he covered about a mile of water, the drone captured a truly startling sight: Kingsbury was swimming alongside a shark, perhaps a couple dozen feet away.

Fortunately, he never got caught in close quarters with the shark, although as the drone footage shows, it was a pretty near miss. Far nearer than most people would want to come to rubbing elbows with a shark in open water, to say the least.

According to the News and Observer, the sighting of the shark led the police to turn the chase for Kingsbury into a rescue effort, mobilizing the U.S. Coast Guard and the Topsail Beach Police to try to retrieve him. He reportedly took two hours to swim all the way to North Topsail Beach, where he was apprehended.