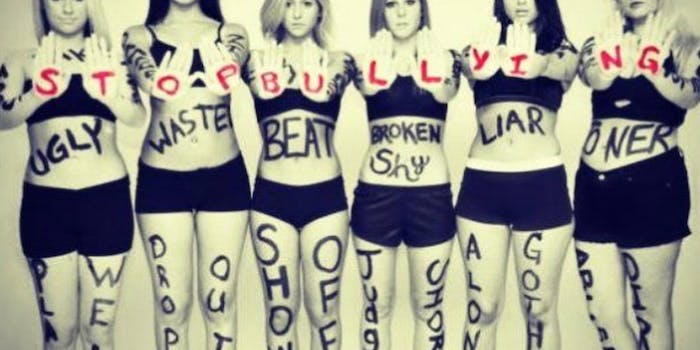 A Facebook group called We Are Against Bullying reported the man's remarks to his employer, Mr. Big & Tall.

A man in Ontario has been fired from his job after using Facebook to post an offensive comment about Amanda Todd, the long-bullied 15-year-old who recently committed suicide.

The man, whose identity is anonymous, was outed by Christine Claveau, a once-bullied mother from Alberta, Canada, who’s spent the past four days reporting offensive commenters via a Facebook group she helped start, the 700-member strong We Are Against Bullying.

Claveau, 26, told The Ottawa Citizen that she and two other ladies started the group after seeing a rash of abusive comments concerning Todd’s death showing up on their Facebook feeds. As other members have joined, they’ve passed along links to comments on their feeds.

Claveau and her cohorts have reported each comment to Facebook, which prohibits hate speech, but the one coming from this Ontario man’s seemed to resonate more than most.

In that post, which has since been deleted, the man referred to Todd with a derogatory term and wrote that she “deserved to die.”

“It made my stomach turn that someone could write that after this person had committed suicide,” Claveau told the National Post. “It was terrible.”

Claveau clicked on the man’s Facebook page and found that he’d listed his employer, Mr. Big & Tall, was listed on his About page. She quickly sent an email to the men’s clothing company and told them what he’d done.

On Wednesday, Dave McGregor, the president of Grafton-Fraser, which owns Mr. Big & Tall, confirmed to the National Post that the reported man no longer works for the company.

“Our company ethics are based on tolerance, respect and fair and honorable treatment of all individuals, internally, with our customers and the population as a whole,” he said.

“We have zero tolerance for the mistreatment of others, no matter what form it takes.”

Neither, apparently, does Claveau. She told the National Post that the We Are Against Bullying Group has already helped report nearly 1,000 offensive comments to Facebook and a few others to the Royal Canadian Police.

“We’re trying to call out all cyber bullies,” she said. “We’re really trying to make a difference.”

Photo via We Are Against Bullying/Facebook