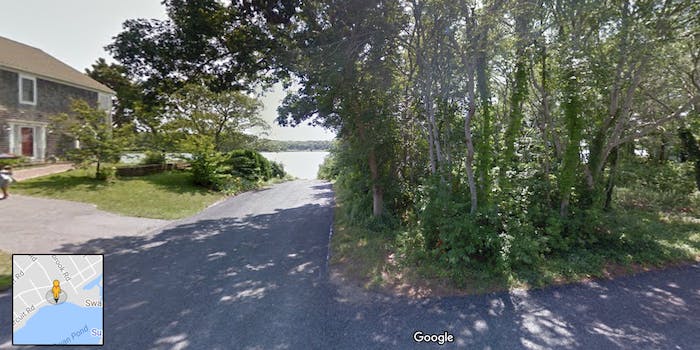 Area man puts too much faith in GPS, drives into lake

You can't always trust your GPS.

A Massachusetts man drove his car into a pond while following the directions of his GPS.

Daniel Alley, our ill-fated driver, was transporting a passenger down Lake Road (kind of a tip off, you would think) at around 1:30am ET, according to Fox 25 Boston.

Alley told police he was using the GPS because he was unfamiliar with the area, and when it told him to continue straight, he complied. Straight turned out to be Swan Pond, and he plunged right in.

When police arrived the vehicle was about 100 feet off the shore, and almost completely submerged.  Police discovered that Alley’s license had been revoked, and Fox reported that “he was cited with operating a motor vehicle with a revoke license.”

Luckily both Alley and his passenger were fine. The fire department began working to remove the car from the pond shortly after arriving on-scene.

We’ve all been there. Sometimes the electronic voice will direct you onto an undesired toll road, or on an unnecessarily convoluted route. If you are directionally challenged, like me, the risk is usually worth the reward. I couldn’t find my way home from the grocery if not for my GPS, so if the only risk is the potential for a surprise dip in the local lake, it’s one I’m willing to take.