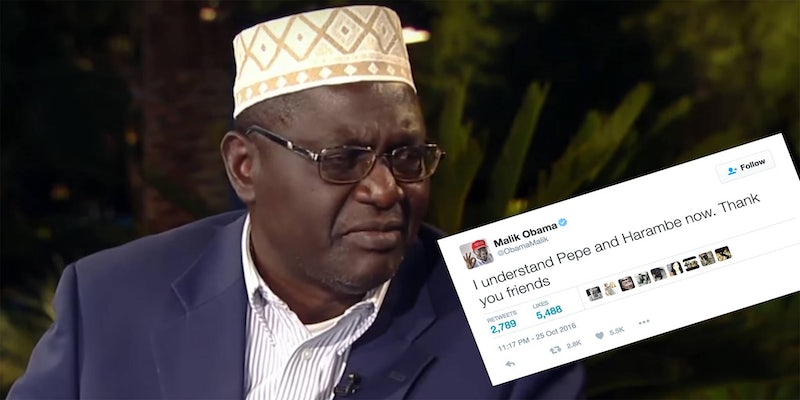 'Who can sleep when there are tweets?'

On Saturday, Malik Obama celebrated finally being verified by tweeting the good news to his over 46,500 Twitter followers. Obama’s the half-brother of the president, an ardent Donald Trump supporter, and the purveyor of such fire tweets as these eye-opening gems.

Do not send pictures of your privates. Thank you my friends.

His account is basically perfect, taking a page from the MAGA-loving candidate he similarly adores. Except Malik doesn’t have a Kellyanne Conway looking over his shoulder, deleting past rants, and tapping shit out on an iPhone or iPad while he whiles away at the ol’ Android, hoping no one notices “check out sex tape.”

Nary a single nonsensical thought goes by that Malik does not tweet, it seems.

No one has time for baseball

Do not cheat Colorado or New Hampshire. I will know and I will be mad

If you deep-fried the Drudge Report siren in Alex Jones’ batshit male supplement and sprinkled the “liberal tears” the alt-right likes to think it’s causing, you’ve pretty much got Malik. His shit is delectable and seriously earnest. There’s a purity to losing sleep over Twitter, especially when the candidate you’re backing feels the need to crank out some bullshit tweets at 3am and subsequently brag about it.

Who can sleep when there are tweets?

Malik says he knows all and will reveal it in time, but is the social media superstar himself hiding something?

How deep does this rabbit hole go? pic.twitter.com/upttJQr5UN

Remember good ol’ Chuck “homosexuality fucks up trains” Johnson? The shitkicker who doxed the subject behind Rolling Stone‘s controversial and retracted “A Rape on Campus” article and threatened to “take out” Black Lives Matter activist DeRay Mckesson? That guy.

Well, he’s banned from Twitter. And Malik hasn’t exactly been stellar at keeping his fleeting viral fame going. Are they one and the same? According to Malik, he’s “not a parody” but that doesn’t completely discredit this Johnson theory.

I told you I am not a parody I am malik so now I am verified. Vote Trump now okay!