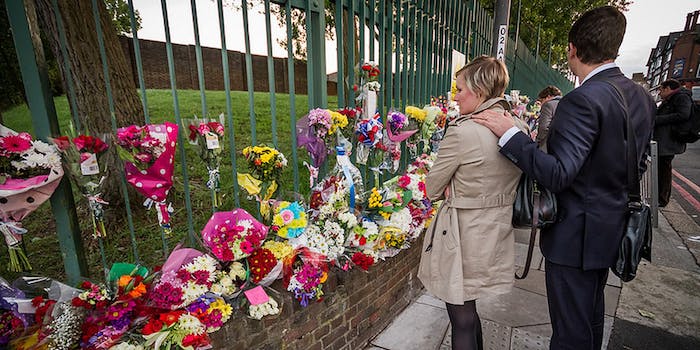 On bail for racist comments made on Twitter, the two men were charged for "malicious communication” on Facebook.

Benjamin Flatters, 22, was arrested for “malicious communication” on Facebook.

Flatters and the other unnamed man, 23, had been out on bail after posting similar racist comments on Twitter, according to the Daily Mail.

The comments on both sites were made in the wake of the murder on Wednesday of 25-year-old Lee Rigby, a soldier, in Woolwich, a district of South London, apparently by two British Islamic converts of Nigerian descent armed with meat cleavers. Rigby, of Manchester, had served in the Second Battalion Royal Fusiliers in Afghanistan.

The exact wording of the comments on Facebook was not reported, but they were said by the Daily Mail to be “allegedly of a racist or anti-religious nature.”

Flatters, of Lincoln, was arrested by police in Bristol after authorities received complaints regarding the comments on the global social media site. He will appear before magistrates today. He is being charged under the U.K.’s “Public Order Act.”

Unlike the U.S., British law does not have a First Amendment analogue that protects freedom of speech for its own sake. So laws criminalizing types of speech, like racist pronouncements, are easier to pass and enforce.

Detective Inspector Ed Yaxley of Avon and Somerset Police, which covers Bristol, was quoted by Mail Online as saying, “These comments were directed against a section of our community. Comments such as these are completely unacceptable and only cause more harm to our community in Bristol. People should stop and think about what they say on social media before making statements as the consequences could be serious.”