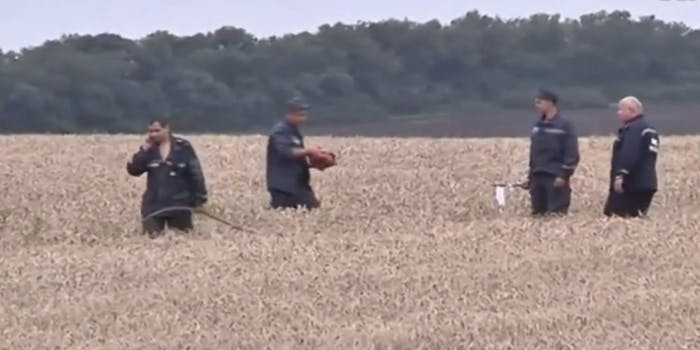 Video that purportedly shows the recovery of “black box” of downed Malaysian Flight 17 surfaced on the Internet Sunday.

It shows a number of men canvassing a field before one comes away with the large orange box. According to NBC news, the man’s off camera voice says “flight recorder” in Russian, the men are wearing Ukrainian Emergency Ministry uniforms, and Ukrainian officials said rebels were in possession of the black box. The video was shot Friday.

Flight 17 was the victim of a tragic attack on Thursday, when an unknown attacker shot it down with a surface to air missile as it flew over part of Ukraine that’s held by pro-Russian rebels. All 298 civilian passengers and crew on board were killed. Both Ukraine and Russian separatists have blamed each other for the attack.

Also on Sunday, rebel leader Alexander Borodai claimed his group was in possessian of the black box and would hand it over it to the International Civil Aviation Organization, the AP reported.

U.S. Secretary of State John Kerry claimed that “extraordinary circumstantial evidence” indicated that Ukrainian separatists were responsible for the flight, and that Russia likely armed those rebels.