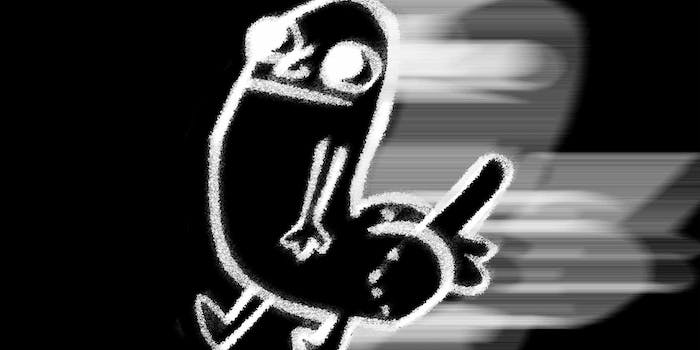 Someone sent me a Dickbutt in the mail, and I don’t know who or why

Forget Ship Your Enemies Glitter. This is much funnier.

The plain white envelope seemed innocent enough, and the small white card inside teased something pleasant.

“Someone sent you something special,” it read.

What could it be? A party invitation? A note from a friend I hadn’t seen in many years? I eagerly flipped it open to find the gift hidden inside. I’ve probably seen hundreds, if not thousands, of Dickbutts online. The ubiquitous image, first illustrated by K.C. Green in 2007, has a tendency to pop up when you least expect it—we’ve called it the Rickroll of the future. This one did just that, only it had appeared here, in the real world, instead of at the end of a GIF or in an obnoxious YouTube comment.

I still don’t know who sent me this Dickbutt. If that person is reading this story, I’d like to commend you on your impressive Dickbutt skills.

At least I know where the Dickbutt came from. It was sent from a website called Mail a Dickbutt, where anyone can spend the price of a Starbucks latte to send a customized Dickbutt straight to their best friend or worst enemy. You can apparently customize the clandestine Dickbutt bomb with whatever greeting you desire. The person who Dickbutt-ed me played to my love of surprise gifts in order to ambush me effectively.

It was a dirty trick, but it worked perfectly. As the victim of such an attack, I can’t in good conscience recommend doing this to your own friends, but I suppose there are worse ways to spend four bucks.

Update 4pm ET, Feb. 19: In the wake of this article, the culprit has emerged: my own coworker Taylor Hatmaker. It seems she was contacted by the proprietors of Mail a Dickbutt and decided to send her one gratis Dickbutt in my direction, not knowing the impact it would have.

The worst part is that I aided her in the prank myself, by giving her my address information just days earlier under the guise of some missing paperwork. It was a long con, and I was played like a musical instrument.

Illustration via the Daily Dot