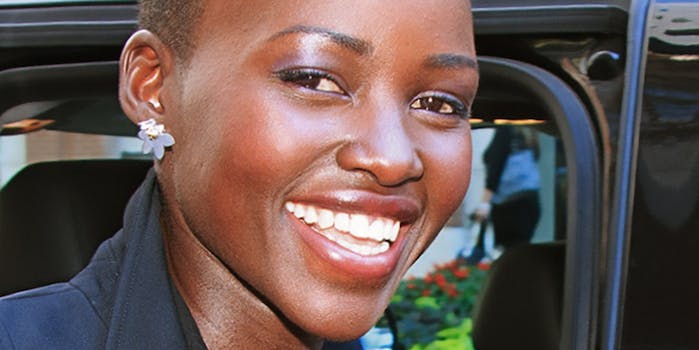 What ultimately sets Nyong’o apart is her distinct blackness.

On Wednesday, People magazine named Lupita Nyong’o the “Most Beautiful Person in the World” for 2014. The cover choice was only surprising in that a black woman was given this opportunity. As it stands and despite her physical differences, Nyong’o is a classic representation of the “It Girl.” Her ascendancy from prestigious film role to red carpet darling to Oscar winner is familiar and true. Similar career trajectories can be seen in It Girls ranging from 2013 Oscar winner Jennifer Lawrence to comedic crossover Emma Stone.

What ultimately sets Nyong’o apart is her distinct blackness.

Hollywood is an industry that praises sameness over the multifaceted. It is already difficult enough to reign as the “chosen” black female celebrity. Unlike their white acting peers, black actresses are typically not allowed to ascend and maintain their mainstream, A-list status with other black actresses. The number of white A-list actresses at any given time dominates beyond any other race or ethnicity. Hollywood typically only allows for one woman at a time (see Halle Berry and Kerry Washington) before spitting them out and anointing someone new.

And when they do ultimately accept a black actress, her visibility, selection of available roles and crossover opportunities are severely limited in scope. A certain level of perfection is required of our black actresses. One bad role can ultimately lead into a downward spiral in cultural cache. For Halle Berry, that was Catwoman.

As well, Hollywood still only accepts a limited idea of blackness: straight hair, light skin, voluptuous curves. There is only one way of being black. Nyong’o’s success then stands as a rarity that deserves attention. With her short natural hair and dark skin, Nyong’o has succeeded against the stereotypes, the limited levels of acceptability. She has—in a way—redefined what it means to be a black actress in the mainstream. And through that redefinition, she has found a base of admirers from a variety of races and ethnicities ready to follow her on her journey.

It remains to be seen whether Lupita is an anomaly or the beginning or something newer and more accepting in Hollywood. One can argue that her success can be drawn from the fact that she is so different from our ideas of the black mainstream. She draws our attention because physically she bucks what we have come to accept and identify as mainstream blackness. How can we look away when she is so different from what we’ve always known?

But that would limit her capacities as an actress and an entertainer. That would reduce her star quality solely due to her physicality. And it was her role as Patsey—a role decidedly structured around her vulnerability and strife and not her physicality—that made so many people stop and pay attention.

To be anointed “Most Beautiful” by a publication as mainstream as People magazine is a not only a career coup for Nyong’o. It is a coup for black women everywhere. With her visibility, black women are now seen in a different light. As well, the new light has been accepted, has been embraced, has been loved.

It is not that we were waiting for the mainstream to embrace different representations of blackness. Black women have and will forever do what they please. We are masters of community and masters of individuality.

Rather, Nyong’o’s mainstream acceptance will perhaps stand as a signal to other young women of color that they can look unlike every other black female celebrity and still be okay. If I had heard and seen that as a young woman, I wonder if I would have spent so many years in hate with my hair, my skin, my physicality.

No, I (and I imagine many other people, too) recognize in Nyong’o the beginning of a new Hollywood and new mainstream. She is not the only one making a difference. Consider Solange’s short natural fro. Years ago, when she removed her weave and cut her hair, people thought she was crazy. In 2014, she is an icon of femininity and a proud Carefree Black Girl.