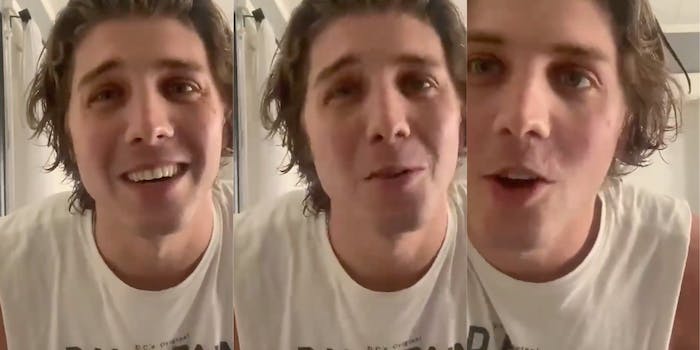 'These poor people live in these tiny apartments.'

A director was caught trashing Euphoria actor Lukas Gage’s apartment during a virtual audition held on Zoom. The director seemingly thought his mic was muted when he made the remarks.

In a video of the incident, which was posted to Twitter by Gage, the actor was settling in for his virtual audition when he caught the unnamed director speaking to another person over Zoom.

“These poor people live in these tiny apartments. Like I’m looking at his background, and he has his TV, you know,” the director can be heard saying.

The director immediately apologizes, saying he is “so, so sorry” and “mortified.” Gage again reminds him that he could upgrade his apartment if he got the role.

On his tweet Friday afternoon, Gage wrote: “Psa if you’re a shit-talking director make sure to mute ur shit on zoom meetings.”

Users, including fellow actors, commended how Gage handled the situation, with many calling him “classy.” Viewers also took a moment to shame the director for being “so disconnected from reality.”

“And we wonder why students are reluctant to share their screens. Amazing how badly people can suck,” user @MissElli_FCProf observed.