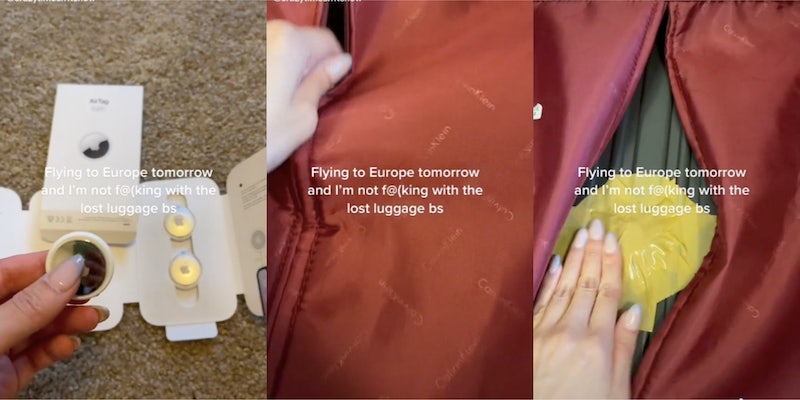 ‘I’m not f*cking with the lost luggage bs’: TikToker shares ‘hack’ for not losing luggage at airport

'I am nothing without my clothes ok.'

After a summer filled with travel issues, lost luggage is a common fear for frequent fliers. While most hand their bags over to the airline with nothing more than a prayer that they will make it to their final destination, a user on TikTok has gone viral after sharing their method for keeping track of their luggage.

In a video with over 5.3 million views, TikTok user Jenny (@allthatanddimsumm) offers her solution to the lost luggage issue: AirTags.

The video shows Jenny taping an AirTag to the inside of her luggage.

“I am nothing without my clothes ok,” she writes in the caption.

Apple’s AirTag allows users to track their items using the Find My app. The device works by anonymously sending out a Bluetooth signal to nearby Apple devices to locate itself, then passing that location information on to the user, according to Apple’s website.

At first, some commenters said that Jenny’s hack was a good idea.

“I work in baggage and the fact that people have started doing this is good because we don’t always get information on where the bag is,” one user wrote. “good job.”

“Everyone pls do this,” another agreed. “Every customer I seem to serve in work from Canada or the US recently is always in because the airline lost their luggage.”

However, other users suggested that this trick might not be as effective as one may think.

“Lost my luggage 2 months ago and still haven’t gotten it back. Even tho Ik where it is, I’m not gonna fly across the world to get it yk,” one commenter claimed.

“My cousin did this and her luggage is still lost a month later in the Paris airport,” a second shared.

“AirTags dont help lol, they will just laugh and say so what even if its with a location, they’ll still make you wait weeks,” a third offered.

A New York Times article earlier in the year advised travelers to put a device like an AirTag in their luggage; however, an earlier story from the same article seems to back up the idea that doing so may be ineffective.

“Ms. Datta filed a lost luggage claim at the airport, but when the suitcase was not delivered to their hotel in Vienna the next morning as promised, she began emailing the airline, sharing the bag’s location (according to the AirTag) daily,” author Julie Weed writes. “She received no response.”

The best course of action, one commenter wrote, is simply being clear about your bag’s identification.

“I’ve worked for a company that builds luggage systems. The best thing you can do is an old fashioned info tag with an origin location and e-mail,” the commenter advised. “Most bags are lost bc 1. You showed up too early & your bag went to storage 2. Human error reading the [label] ‘MAH confused with HAM’ and so on.”

The Daily Dot reached out to Jenny via Instagram direct message.