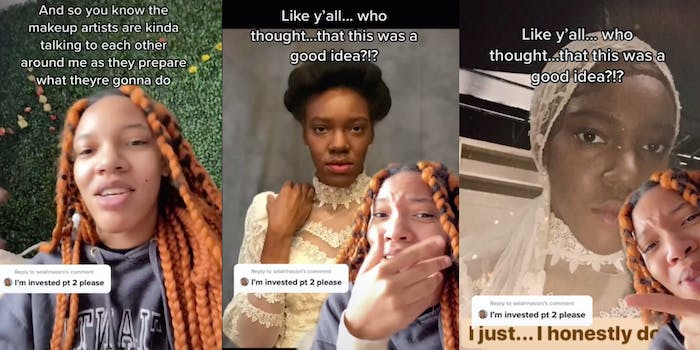 ‘I had no idea they were going to do this to me, and if I knew beforehand I would not have accepted the job.’

An extra on Lovecraft Country revealed via TikTok that her skin was darkened by the show’s makeup artists.

In her video, 23-year-old Kelli Amirah explained that she was cast to play a younger version of another character for a wedding photo that would appear on a show. She discovered later that the show was Lovecraft Country.

Amirah said, as an extra, she was surprised to get her own trailer and makeup done with the show’s stars. As she waited to get her makeup done, the New York-based actress recalled the makeup artists talking amongst themselves about how she looked “a little lighter” than the person she was portraying the younger verison of.

The actress watched them apply foundation that kept getting “darker and darker.” She said she didn’t feel comfortable with what was happening, but thought she couldn’t say anything.

“I have no clout, no pull, no nothing,” she said in her video. “I was so uncomfortable, I had no idea they were going to do this to me, and if I knew beforehand I would not have accepted the job.”

Amirah then revealed side-by-side images showcasing what she normally looks like versus the final result. Sporting a 1930s wedding dress, she’s seen taking selfies with a much darker skin tone.

“They really did me like Zoe Saldana as Nina Simone,” she quipped, referencing a 2016 biopic where Saldana, who is of Dominican and Puerto Rican descent, had her skin darkened and wore a prosthetic nose to portray Nina.

Amirah’s videos are drawing accusations of blackface and colorism and sparking a conversation online. “Even a show about the horrors of racism in America didn’t stop them from being horrific,” Amber Phillips wrote in a viral Instagram post spotlighting the TikTok videos.

Phillips noted that Amirah sat “between the main actors” of the show, saying, “This is also why we can’t leave our political education up to celebrities, who have been benefiting from colorism this whole f*cking time.”

“We know this is a norm for Black spaces that refuse to acknowledge racism through the lens of the people most impacted by it,” Phillips wrote. “Colorism AND fatphobia needs to be more important to Black people who are telling Black stories and working on behalf of Black people.”