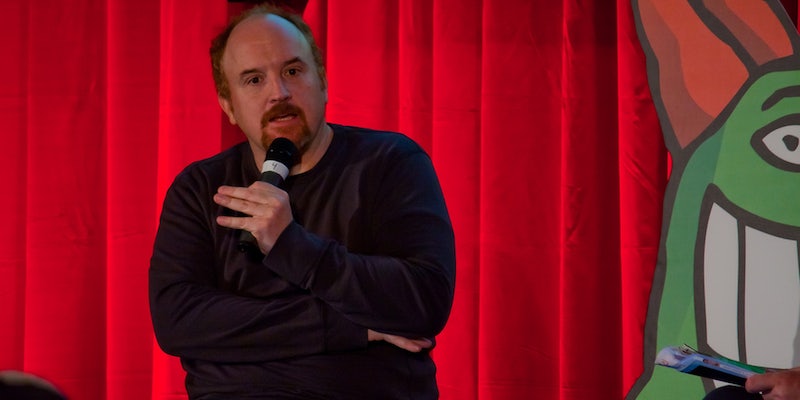 Louis C.K. may be the Internet's favorite comedian, but there's room at the top for more than one.

GQ’s May cover story refers to Louis C.K. as “America’s Undisputed King of Comedy.” To back up such a bold statement, the magazine claims: “Comedy is subjective, but not with Louis C.K. He’s the funniest man alive, and we don’t want any of your lip about it.” This kind of hyperbolic language isn’t anything new or surprising. People love to say that “This is the best thing ever. Period.”

But with Louis C.K., the declaration doesn’t seem far off. In the article, GQ’s Andrew Corsello says that even though he thinks the word “genius” has been “cheapened” through overuse, he still finds a way to justify using it to describe C.K., writing:

The G-word applies because Louis C.K. is, like Pryor, so much more than, and more vital than, a comedian. I’m not referring here to the quantitative “more than” of C.K.’s extra-stand-up professional life, mind-boggling as that is (writing/producing/directing/starring in his semi-auto-biographical FX series, Louie, starting its fourth season this month, large roles in David O. Russell’s American Hustle and Woody Allen’s Blue Jasmine, et cetera). I’m pretty sure I’m not even referring to content—that is, to the endless shocks of self-recognition C.K. delivers, about how we Americans are and aren’t thinking, feeling, fucking, connecting in the second decade of the twenty-first century. No, C.K.’s genius is all about how he forcefully accesses that psychic marrow of ours, “going there” in an era in which it’s gotten all but impossible to shock. There is nothing he can’t and won’t demystify or de-sentimentalize.

And yet, to marvel at how “shocking” C.K. is misses the whole point of his career.

Corsello goes on from there to discuss a bit where C.K. talks about how his 4-year-old daughter can be an “asshole.” But what Corsello doesn’t do is talk about how the “demystifying” and “de-sentimentalizing” nature of that bit is ultimately makes it so un-shocking. Any comedian can shock. To shock, all one has to do is say something most people wouldn’t agree with.

But what takes C.K.’s comedy a step further than shocking, and a step better, is his ability to find truths that most of us, consciously or unconsciously, are already aware of. Anyone who’s ever spent extensive time around 4-year-olds already knows they can be assholes. What makes it funny, like most great comedy, is that it comes down to a simple truth.

Although Corsello chooses to blow past it, it’s worth taking time to mention that C.K.’s show is undoubtedly one of the reasons he’s considered among the best working comics today. With only three seasons and under 40 episodes, Louie still managed to sneak into the WGA’s list of the 101 best written series of all time and has already established C.K. as one of TV’s great auteurs, with a singularly unique vision.

Then there’s his pre-fame career to take into account. Although it’s fair to say that C.K. has experienced more success in the past few years than in the many leading up to them, he’s hardly an overnight story. C.K. has been honing his craft for over two decades, and although his career experienced a lot of lows before reaching its recent highs, everything he’s ever done has been a steady progression, leading up to where he is now.

He’s a true comic’s comic, as opposed to an arena superstar like Dane Cook—and the difference between their careers was explored in one of the best episodes of his show. He’s retained the respect of his comedy peers, building a new hour every year, and somehow continued to amass more fans and endless praise from critics in the process. He’s even beloved by the mercurial Internet, all the while being critical of everything the age of technology has wrought.

So why does crowning him the “Undisputed King of Comedy” not feel quite right?

Maybe it’s because the Highlander-ish, “There Can Be Only One” mentality discussed above always feels a little suspect. Every year, we rank the best-ofs, and give awards for the most talented, in some kind of attempt to forget our own impermanence. It’s hard to admit that someone better will always come along, and that one day, like us, they too will be just a memory.

Or maybe it’s because crowning an “Undisputed King of Comedy” seems too limiting.

It’s sort of like the discussion around Iggy Azalea and whether there can really only be “one rapper with a vagina” at the top of hip-hop. Hip-hop has always been about competition, but doesn’t this mentality prevent other female MCs from enriching the genre? Isn’t it silly to assume that only Nicki Minaj or Iggy Azalea or whoever else can be at the top of their game at one time?

Which takes up to the idea of whether the “King of Comedy” has to be a “King” at all. Suggesting that there has to be a “King” pushes female comics to the margins, a place they’re increasingly leaving. As is the case with most things, comedy is still mostly dominated by straight white males, although stand-up has traditionally been less dominated by white Anglo-Saxon Protestants than many fields.

Consider that while there was sadly only one woman in the top 10, Comedy Central’s 2005 list of the 100 greatest stand-up comics of all time included four Jewish comedians and four black comedians in the top spots, number one of whom was Richard Pryor. (It should also be observed that Louis C.K. was all the way down at number 98, proving, if nothing else, that things change.)

In this light, it’s worth asking whether C.K. has any more claim to the crown than someone like Kevin Hart.

Like C.K., Hart has been churning out a wealth of new material in recent years, releasing four specials since 2009, including last year’s Let Me Explain, a surprise sleeper success that pulled in $32 million in theatres. He also created a show for BET called Real Husbands of Hollywood and was ranked by Forbes as the sixth top-earning comedian in the world. C.K. placed just ahead of him in the number five spot, earning only $2 million more a year.

What separates Hart so far from the likes of Dave Chappelle, Chris Rock, Eddie Murphy, Bill Cosby, and Richard Pryor is crossover success with white audiences. Although Kevin Hart had a massive hit at the box office earlier this year with his comedy Ride Along, Richard Corliss of Time magazine said (somewhat distastefully) that the film was “less a blockbuster than a blackbuster.”

Corliss continued, “Its weekend audience was 50 percent African-American, 30 percent Hispanic, and only 12 percent Caucasian. So whites bought only about $5 million worth of Ride Along tickets.”

But even if white people did only buy a small percentage of tickets to Ride Along, does it matter?

Corliss’ piece isn’t directly suggesting that black and other minorities’ money is worth less than white peoples’, but he’s only about a step away from doing so. Most major critics and media personnel are white, and none of them would never even think to ask, “If most of Louis C.K.’s fans are white, does his success count as much?”

Is Louis C.K. really the Undisputed King of Comedy? Probably. But he shouldn’t be the only one. Comedy is too vast and important to be relegated to one champ at a time. In comedy, there is room to give more than one grand jester their crown.