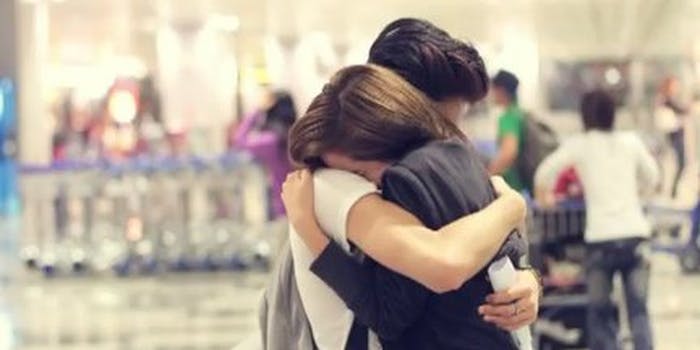 Love across the wires

Having been in a long-distance relationship for quite some time, I can absolutely relate to a YouTube video that’s proven to be popular on the Web over the last few days.

Camilla, a 17-year-old student living in Sweden, and Mahathir, a 19-year-old fashion coordinator and student from Singapore, have been in a long-distance relationship—a purely virtual one, as they’d never met in person—for two years.

Over Christmas, they temporarily made the 5,983 miles between their homes a non-issue as they held each other for the first time.

Their pure joy at simply being with each other is incredibly infectious. The video diary of their time together has become a hit on the Web. Since being uploaded to YouTube last week, it has been viewed 809,095 times.

Though Mahathir (Madayforshort) has disabled comments on the video—titled “Long distance relationship,5983 miles apart”—he details how the couple met in a new video he published yesterday. Camilla commented on a Facebook photo of his and they became close by talking online almost every night. He describes their meetup as “the greatest experience ever in my whole entire life.”

Mahathir and Camilla are both responding to comments and questions on their respective Tumblogs. While they may have had a fantastic time, they’re not quite sure when they’ll be able to meet in person again due to their respective studies.

Mahathir says in the video’s intro that “Love will always win.” When you care about someone that much, the pesky long-distance thing will eventually disappear. Trust me on that.

Now, if you’ll excuse me, I must finish chopping that onion.