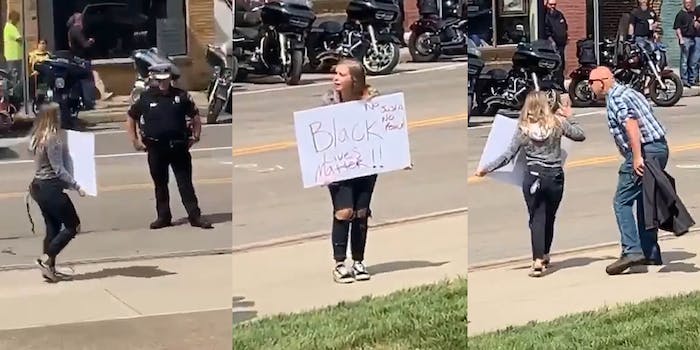 The police, as of yet, have not done anything about the alleged attackers.

A teenage girl held a solo Black Lives Matter protest in Bethel, Ohio only to be met with harassment, verbal abuse, and assault from passers-by while the police looked on.

On June 14, nineteen-year-old Ryley Wrigglesworth discovered there was an “all lives matter” protest going on downtown, and she decided to go and perform a counter-protest for Black Lives Matter.

Once there, the enraged crowd started shouting “all lives matter” and other indiscernible but aggressively toned statements at her. Eventually, she was cornered by a group of white men who took and destroyed her sign, and hit and shoved her. Video captured by another bystander appears to show a police officer approaching her after the assault only to direct her across the street, away from the men, instead of taking action against them.

Not deterred by her experience, Wrigglesworth made herself a new sign and went right back out to continue protesting, where she was met with yet more verbal abuse.

Wrigglesworth later went on to retweet video from another protest, allegedly featuring the same man who tore up her sign punching another protester in the back of the head as he spoke to police on camera. The police present in the video do not appear to be interested in taking action against him even after the protester points out what just happened. She names the assailant as Johnnie B. Devault and points out he has a warrant out for his arrest.

However, another Twitter user replied, stating that they’re two different men and claiming to have identified her assailant as the subject of yet another video from the protests, one showing a large number of counter-protesters violently intimidating and assaulting two Black Lives Matter protesters.

The police’s inaction while witnessing her assault has received a lot of attention, with some Twitter users saying that their refusal to protect even a white girl advocating for Black lives indicates a deep rooted racism.

According to a friend of Wrigglesworth, as of yesterday the Bethel police department still haven’t responded to Wrigglesworth contacting them about the events at the protest.

The Daily Dot has reached out to Wrigglesworth for comment and will update this article if she responds.