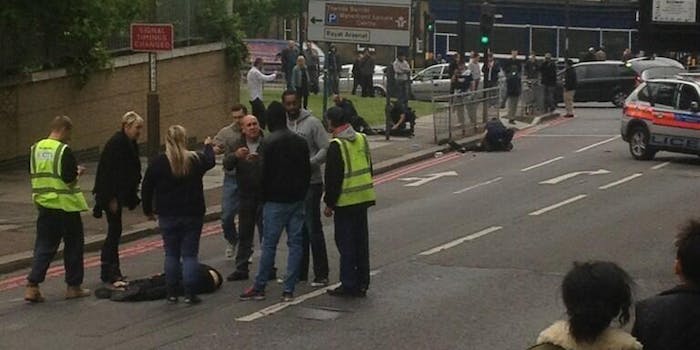 Two men reportedly jumped out of a car and cut off a victim's head with a machete before being shot by police.

A man was beheaded in what is being described as a terror attack in the Woolwich area of London Wednesday afternoon. Two people were also injured in the alleged car and machete attack.

Witnesses reported that two men beheaded another. A local member of parliament identified the victim as a soldier stationed at barracks close by. The two men believed to be the attackers were shot by armed police and are being treated for their injuries, Home Secretary Theresa May told the BBC. May has convened the U.K. government’s emergency response committee, Cobra.

Prime Minister David Cameron had planned to stay in Paris overnight after meeting with French President François Hollande. He is returning to London this evening. Cameron said there were “strong indications this was a terrorist incident.”

ITV News has video of a man at the scene with blood on his hands, carrying a knife and meat cleaver. He made several political statements, and said “We swear by almighty Allah we will never stop fighting you.”

The head teacher at a nearby school saw a body in the street and after hearing gunshots, told staff to lock the gates.

Witnesses tweeted from the scene in Woolwich, sharing photos of the police response. Boya Dee, a member of grime group Nu Brand Flexxx, claimed to have witnessed the incident while on his way to buy groceries. While it’s not confirmed if Boya Dee was actually there at the time, his tweets were posted at the time the beheading reportedly took place.

Ohhhhh myyyy God!!!! I just see a man with hishead chopped off right in front of my eyes!

Woolwich #se18 whyyyyyyyyyyy!!!! Fuck!!!! Right next to a primary school!

Oh my God!!!! The way Feds took them out!!! It was a female police officer she come out the whip and just started bussssin shots!!

Mate ive seen alot of shit im my time but that has to rank sumwhere in the top 3. I couldnt believe my eyes. That was some movie shit

The two black bredas run this white guy over over then hop out the car and start chopping mans head off with machete!!

Then the next breda try buss off the rusty 45 and it just backfires and blows mans finger clean off… Feds didnt pet to just take him out!!

These times i was just going to the shop for some fruit and veg and i see all that!

Another witness uploaded a YouTube video of the aftermath.

Still others shared photos from the scene on Twitter.

The identities and motivations of the attackers are still unknown.