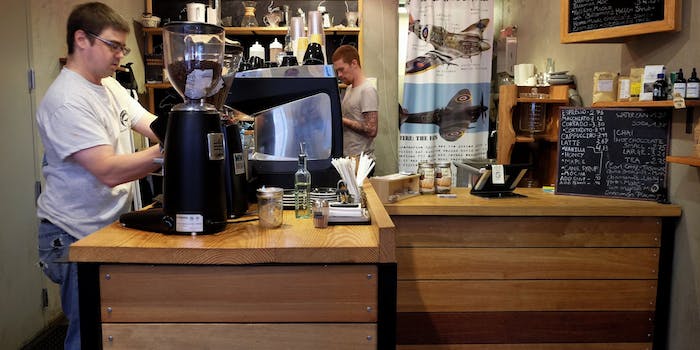 This is a crime against art and everything that is decent.

A wise man once said that the only thing necessary for the triumph of evil is for good men to do nothing. Well, tyranny has reared its ugly head in London, where the owners of a coffee shop with a vulgar name got an angry letter from their landlord demanding that they take down their “offensive” sign.

The sign for Fuckoffee, which has been present for more than a year, was a clever rebranding effort by Bermondsey Street Coffee, which evidently wanted to serve witticism in addition to caffeine to cranky Brits.

The landlord, who failed to appreciate the owners’ Olympic-level wordplay, gave them until 4pm on Oct. 27 to change their sign or face a penalty.

The letter reads, “We are instructed that you have either erected or allowed your sub-tenant to erect an offensive sign on the exterior of the building […] without the permission or authority of our client and this constitutes a trespass.”

Naturally, people on the Internet couldn’t wait to show their support for Fuckoffee.

Reading about #fuckoffee makes me want to go to @fuck0ffee 😂

One person started a petition in support of the coffee shop that declared, “We, the undersigned, confirm we have a sense of humour and find the continued attack on our beloved Fuckoffee an insult to freedom of expression, freedom of speech and humour.” As of Wednesday afternoon, the petition had garnered 350 signatures.

The Fuckoffee community united to fight oppressive censorship, but despite their efforts, the sign had to be changed—to F*ckoffee.