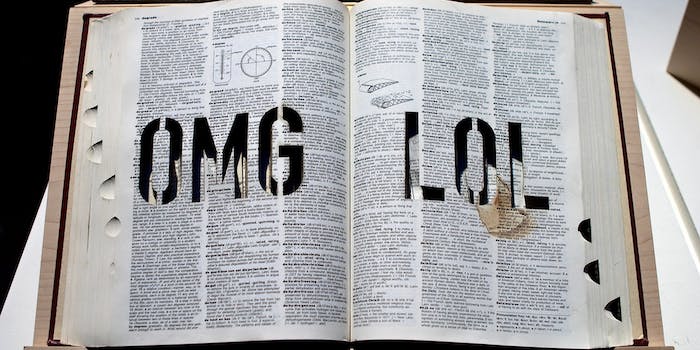 Bad news for the AIM generation.

On the Internet, like in space, no one can hear you laugh. To convey that you read your friend’s hilarious text message, chat, or tweet loud and clear, you most likely type “haha” or respond with an appropriate emoji, not “LOL”—at least according to data recently published by Facebook.

Taking a cue from Sarah Larson, the New Yorker’s “roving cultural correspondent,” who published a piece about how we communicate laughter and enjoyment on the Internet,  the brainiacs at Facebook released some data to the writer’s “anecdotal” evidence. “But why rely on anecdotes when you have data?” they asked.

Taking the quantitative route, Facebook analyzed posts and comments from the last week of May this year “with at least one string of characters matching laughter. We did the matching with regular expressions which automatically identified laughter in the text, including variants of haha, hehe, emoji, and lol.”

The once-signature laugh of the Internet is all but vanishing from our textual lexicon, but why?

They found that people on Facebook are, indeed, laughing, and when they do, they are not likely to say LOL. Instead, 51.5 percent of users are typing out “haha,” 33.7 percent are taking the visual route with emoji, a surprising 13.1 percent use “hehe,” and only 1.9 percent used “LOL.” The once-signature laugh of the Internet is all but vanishing from our textual lexicon, but why?

It’s easy to assume that age probably plays a major factor in these finding; however, the study found that, despite my assumptions, emoji users are only slightly younger than people who use “haha.” The median age for both is more than 20 years. But as we all get used to newer technology, the language of Internet communication will evolve with the gadgets—it doesn’t matter if you’re a teen, a twentysomething, or much older.

The ‘90s and ‘00s were filled with countless acronyms that not only expressed laughter, but also expressed shock (OMG), confusion and anger (WTF), your imminent return (BRB), or even an extended physical reaction to hilarity (ROFL). The origins of LOL, although disputed, can actually be traced back to a 1989 newsletter, according to the Washington Post. The dispute from Wayne Pearson, who claims he invented the acronym in the early ‘80s, Slate reports, asserts that he was participating in a “teleconference room” when he read a joke so funny he was “laughing out loud, [and it echoed] off the walls of my kitchen. That’s when ‘LOL’ was first used.”

Although it’s hard to imagine the explanation that came after the spontaneous outburst of acronym, the expression evolved into more of a simple acknowledgement that a joke had been told, rather than a literal action. LOL still feels somewhat ubiquitous in my social media circle, which is filled with ironic-types who likely believe that Internet slang is destroying language—so why not use it to make a silly Twitter joke seem that much cheesier?

The decline of that era of textspeak, however, is more an indication of the obsoletion of the AOL Instant Messenger generation—people who went into chat rooms regularly and typed “a/s/l” to a mystery person on the other end who was most definitely not a troll (or were they?). Most likely, they were just your best friend.

LOL was a staple of AIM vernacular.

But LOL, and Internet textspeak in general, had been scapegoated as a killer of language. In his TED talk, “Texting is Killing Language. JK!!!” linguist John McWhorter rebutted this idea. He noted that the language used in texts is “evidence of a balancing act that young people are using today, not consciously, of course, but it’s an expansion of their linguistic repertoire.”

Quickly taking the place of Internet indications of laughter, according to Facebook’s data, is emoji, which some are citing as evidence of the death of modern language. But what for? Ben Branstetter wrote for the Daily Dot earlier this year, “emoji can never grow organically to help represent abstract concepts” due to the fact that it can only draw from images of already-existing “physical items or actions… All it can ever be is a direct translation of the languages we speak now, a clipart pig Latin.”

Although he has a point, I find that emoji can add a particular nuance to a conversation, especially now that Apple has added more cultural diversity among the skin tones on the graphic keyboard. The availability of a variety of responses removes the vagueness from terms such as “LOL” or “haha.” A perfect demonstration of this is through the Hillary Clinton campaign’s Wednesday crowdsourcing of opinions about the state of student debt, “in 3 emojis or less (sic).”

The responses ranged from snark to sincerity.

And others just shot more shade at the very idea of emoji.

.@HillaryClinton Uggg… so much technology and the ability to communicate directly with people… and you go with this? Emojis? :(

But emoji gets a lot of flack for simply being a visual representation of language. Yes, it has its limits, but nobody was going to rewrite Moby Dick  in a casual text. That’s already been done, anyway. Emoji, instead, can be enriching for both users who use the symbols to convey subtle in-jokes to each other, and those who communicate across languages using universal symbols, such as a cry-laughing face.

Data engineer Fred Benenson, who’s responsible for Emoji Dick, told the Independent, “[Emoji] is partially about the frivolity, but it’s also about engaging a part of your brain which uses symbolic and visual thinking, something that I love to do. I also think it has the potential to bridge language barriers.” Indeed, whether you want to add nuance to your “:)” or illustrate the plot of a Hollywood blockbuster, emoji has that capability.

LOL may be dying, but I won’t mourn its passing. Instead, I welcome the advancement of textspeak through modern hieroglyphics. There’s so much benefit users can get by communicating more complicated ideas using simple images. It doesn’t mean language is dying—if you want to write, do so—but if someone texts a funny joke or you want to vent to the former secretary of state about your student loans in three characters or less, you have a much wider range of ways to do so quickly, clearly, and hilariously.