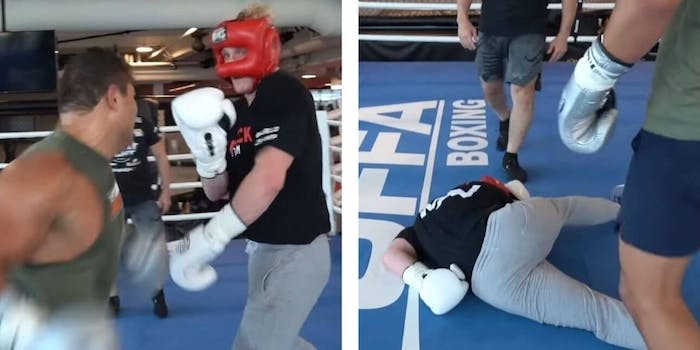 Watch Logan Paul get destroyed by this UFC fighter

The YouTube star falls face first in a heap.

Logan Paul got knocked down to the canvas in his second fight vs. KSI, but he never appeared in great danger of getting knocked out in his professional debut. Sparring with UFC pro Paulo Costa was a completely different story.

In a YouTube video posted Monday, Paul shows himself sparring with Costa, the undefeated UFC middleweight contender. It, um, does not end well for Paul. Costa is nicknamed the Eraser, and that’s exactly what he did to Paul in the video below.

While vlogging in Las Vegas, Paul arrived at the UFC Performance Institute, so he could get in some work with the 185-pound Costa. “It’s a good thing I’m a professional boxer now … who’s 0-1. Goddammit,” Paul said with a smile.

He wasn’t smiling for long, though. The video shows Paul appearing to perform OK as the two boxed in the ring and grappled as wrestlers on the mat, but during the session, Paul took a right hand to the jaw and he fell to the ground face down. After he was revived, Paul said, probably sarcastically, “How’d I do?”

It’s unclear if the knockout was real or if Paul was simply pretending for pageviews, but he certainly doesn’t mind putting himself in the way of potential bodily harm. He’s fought KSI twice in the ring—they fought to a draw in 2018 before KSI won a close decision last year—and he nearly choked out one of his younger brother’s best friends during a recent Miami hotel room dispute.

He also kept his cool when a college student recently spit on him.

But perhaps you shouldn’t be surprised that Paul has begun to take MMA a little more seriously. As Costa told him after their session was over, “90% of guys who go to train MMA have good technique, but not hard spirit. Not big heart. You have both.”