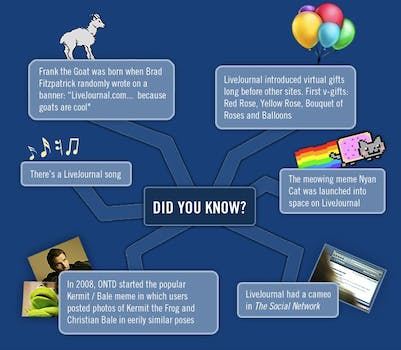 LiveJournal reflects back on highlights of 14-year history

Did you know that LiveJournal has a theme song? Learn more fun facts in this detailed infographic.

During LiveJournal’s recent State of the Goat and LJ Media launch, the Internet’s oldest living social network was focused on building towards its future.

However, now is an opportune time to reflect on its past. This month, LiveJournal turned 14 years old. Nobody (not even LiveJournal) knows for sure which day it was that founder Brad Fitzpatrick launched his creation into the world in  March 1999, but one thing is certain: The site has a lot of history to look back on.

LiveJournal has just released an infographic reviewing some of the highlights in its storied past. Some facts are surprising. For example, did you know that the Nyan Cat meme originally launched on LiveJournal? (Note: Know Your Meme does not confirm this fact.)

Here at the Daily Dot, we give LiveJournal a tough time, illustrating stories about its most vocal users with photos of angry mobs. However, it’s time to give the tenacious site credit for its ability to stick around and continue to evolve.

The network provided this infographic as an exclusive to Social Times, but we’ve already seen Frank guarding a paper copy in the LiveJournal office. Check it out below: