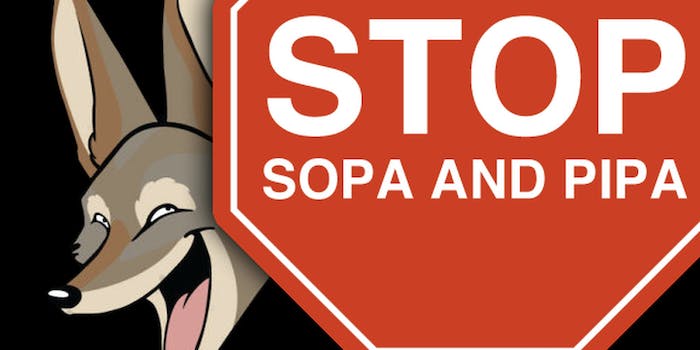 The blogging community preferred to let its users speak out—as they do every day on the site.

LiveJournal, the granddaddy of all social networks, isn’t joining those johnny-come-lately websites in going dark today to protest antipiracy legislation. But the venerable Web community is still raising its voice against SOPA and PIPA.

Since 1999, LiveJournal has provided a safe space for users to test the boundaries of copyright and free expression with works of fan fiction, fan art, and image macros since 1999, before Facebook and Tumblr were even conceived.

In its time, the blogging community has seen a lot of legislation meant to restrict the Internet. At the time of its birth, it made sure it complied with the Digital Millennium Copyright Act of 1998, a balanced set of rules which provided for both free expression and copyright enforcement online.

However, the staff of LiveJournal Inc. has put their collective feet down at SOPA and PIPA.

“SOPA and PIPA are overkill that would have the effect of undermining our collective guarantee of freedom of speech. These two bills are about censorship, and LiveJournal is joining the fight to ensure these bills never come to pass,” wrote the LiveJournal staff in a combined statement.

LiveJournal has not gone dark today. Instead, it has posted a prominent banner on its home page informing users about the bills. And of course, they’ve written a staff blog post on the issue.

However, the blog post has drawn comments from dozens of users who aren’t sure LiveJournal has done enough.

“Why aren’t you guys doing a blackout too? You’ll be as affected as Reddit and Wikipedia,” wrote blitzs_fighters, who quickly gained support from other users.

Others, however, would rather not go without the site for a day.

“Dude shut the hell up, I need LJ to read fanfic. Don’t give them ideas!” wrote violue.

“I totally empathise, but if this bill goes through, they could potentially take down LJ and fanfic for much longer than just one day,” the former replied.

The majority of commenters thought that LiveJournal was the perfect forum to discuss SOPA and PIPA. If the site had gone dark, people might not understand why.

“I actually think staying up and and providing information is better in this case. Given LJ’s history, if the site went down, a lot of people would probably just go into a blind rage and miss the entire point,” wrote lb_x.

“LiveJournal’s purpose is different than a lot of the news & education sites that have gone blackout. We didn’t want to take LJ down on a day when a lot of people might want to talk about this issue,” wrote coffeechica.

Even though LiveJournal itself is up, Oh No They Didn’t, the site’s largest forum with over 100,000 subscribers, has shut down for the day. But that move came at the option of the forum’s moderators—not a top-down measure imposed by LiveJournal staff.

LiveJournal has encouraged users to think about SOPA and PIPA by responding to today’s LJ writing prompt: Why is freedom of speech important to you? Perhaps it’s the site’s hope that the words of their users will speak louder than a shutdown ever could.