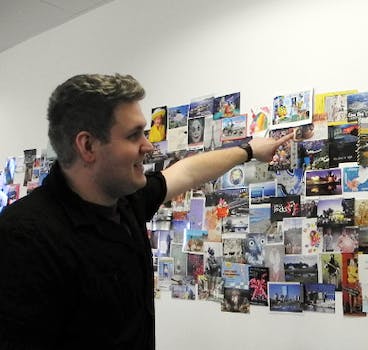 Community leader Brenden Delzer shows off the postcards that remind him of LiveJournal's diversity.

When LiveJournal headquarters moved to San Francisco’s Financial District last year, the staff asked their community to do the decorating.

At least three hundred postcards from users in the U.S., Germany, Japan, Australia, and elsewhere paper the wall of the company’s third floor office.

“When I started working at the old offices, we had postcards from users on the walls already, but they were from 2003,” said Brenden Delzer, LiveJournal’s community leader turned full-time employee, who came up with the idea. “I figured this would be a good way to get fresh postcards.”

In order to drum up new cards, Delzer posted the company’s new address to Oh No They Didn’t!, LiveJournal’s largest community with over 100,000 users. Delzer said he has a somewhat “bitchy” reputation among his userbase, and many of the cards jokingly reflect that.

“A lot of them are pretty snarky. Some have my face pasted onto them in unflattering ways and some address me as Brenden Aguilera,” he said. (Delzer frequently discusses his dislike of singer Christina Aguilera with the community.)

Delzer has started uploading each postcard to LiveJournal and has scanned 298 so far, all of which you can view here. Delzer said the postcards remind him of the global community he’s working to serve each day.

“What I think is really cool about it is that it shows the diversity of our users. We’re working on LiveJournal in the U.S., but here we have postcards from all over the world.”

LiveJournal invited the six community leaders pioneering LJ Media’s publishing initiative to tour the office during the 2012 Community Leader Summit. This reporter tagged along. Check out the photos below for a candid look at the LiveJournal office.