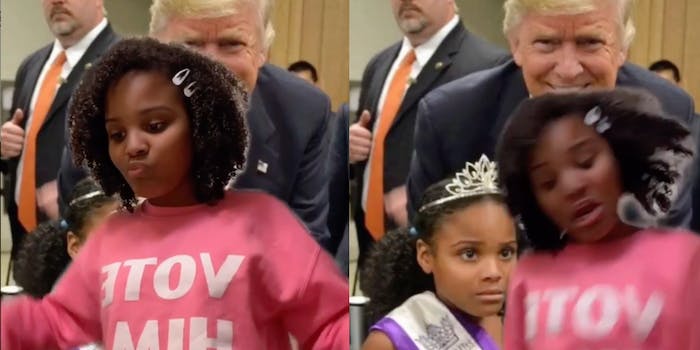 Little Miss Flint, who went viral for looking ‘terrified’ in photo with Trump, is trolling the president online

This is not the first time she has used the meme to troll Trump.

Little Miss Flint Mari Copeny, who became a meme in 2016 after a photo of her looking “terrified” as President Donald Trump held her hand went viral, is now trolling the president on Instagram.

Copeny sported a “Vote Him Out” shirt in her video and encouraged her 150,000 followers to “get out and vote” in its caption.

After former Vice President Joe Biden took Pennsylvania on Saturday, securing the 20 Electoral votes he needed to win the 2020 presidential election, Copeny posted a still of her video to her Instagram Story and said, “Told y’all, Donald just lost his job.”

This is not the first time Copeny has used the meme to troll Trump. On the anniversary the photo was taken, Copeny posted it to show how she’s felt about the year 2020.

“Fun fact, this picture is 4 years old today and my face in it shows how I feel about this entire year. He said he would ‘fix Flint’ in his first 100 days but only mentioned Flint for the first to attack Snyder last week,” she wrote in September, calling out Trump’s inaction on the water crisis in Flint, Michigan, Copeny’s hometown.

The viral photo was taken in 2016 when then-Republican presidential frontrunner Trump visited Flint. While Copeny, who was 9 at the time, appeared terrified in the photo, her mother later clarified on Facebook that she was not.

“We had to get through the crowd twice to get his attention since [Trump] walked out the opposite way he came in (which had her a bit overwhelmed),” Lulu Brazell wrote on Facebook. “Then, with people yelling at him, and add the secret service to the mix, well think how you would feel? Their whole interaction was ten seconds tops.”