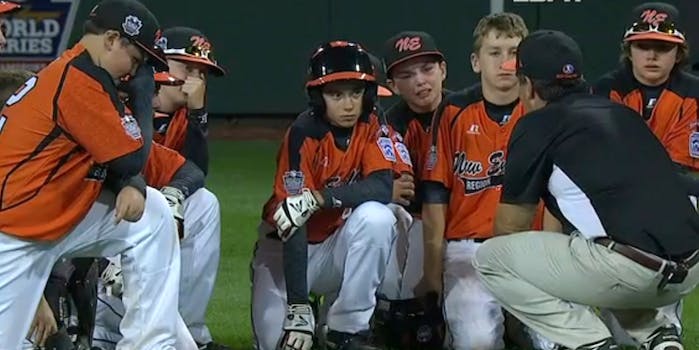 Coach Taylor in Friday Night Lights. Coach Boone in Remember the Titans. Herb Brooks in Miracle on Ice. A Little League coach from Rhode Island just joined the ranks of some of the best motivational speakers in sports, and he did it without a team of Hollywood screenwriters behind him.

When the New England regional team lost their spot in the playoffs to Illinois, it’s safe to say that the young team members were quite disappointed. The disappointment was short-lived, however, once Coach Dave Belisle knelt down and addressed them with words that will likely stick with them for the rest of their lives.


“You guys are going to bring back something that no other team can provide but you guys, and that’s pride,” he said.

The kids were still in tears—though no longer from the loss.

As the video made the rounds on Reddit and Facebook, many people were wiping away their own tears, openly wishing that Belisle could somehow be the coach of every Little League team in the country.