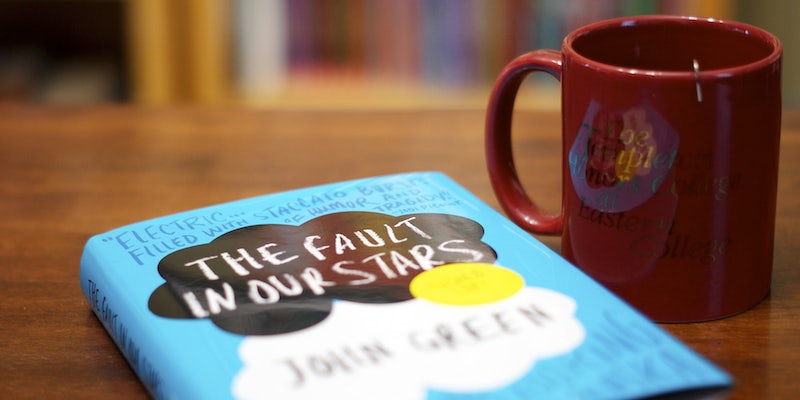 We need to talk about ‘The Fault in Our Stars’

BY NICO LANG AND LEAH PICKETT

Bonjour, dear readers and welcome to another week of reading books on the Internet. My name is Nico Lang, and I am the Opinion editor at the Daily Dot, as well as your slightly beleaguered LitChat co-host. Most weeks I’ll be perky and chipper, but having finished this week’s book earlier today, I’m a bit flummoxed.

Hello and welcome! I’m Leah Pickett of the Chicago Tribune, and I too am quite bewildered by today’s selection.

Why? Because our book of the week, The Fault in Our Stars, is a no. 1 New York Times bestseller, critical darling, fan favorite, and soon-to-be film adaptation starring Shailene Woodley and Ansel Elgort.

Everybody seems to love it, but Nico, I HATED, HATED, HATED it. I hated it to the point that I felt guilty for hating it so much; but alas, I hate it so.

I agree—about approximately half of this book. There are parts I absolutely loathed, that I found so unbearably precious and precocious I couldn’t help but laugh. It’s like Juno goes to hospice.

I read the novel’s first sentence aloud to my roommates in a Blanche DuBois Southern accent, because I just couldn’t fucking help it. But the book is a lot like Augustus Waters, its cardboard cutout of a hero: It’s perfectly fine when it’s not so busy trying to charm you. I didn’t feel like I was falling in love; I felt like I was being swindled.

When it comes to swindling, John Green is really the master.

OK, John Green fans, I know you’re out there. I hear you and see you. And from what I can tell, he seems like a really nice guy. But hear me out. Although this book is snarkier than others in the saccharine “sick-lit genre” (see: Walk to Remember, The Notebook) it eventually gives in to the maudlin in the second half and goes in exactly the same direction as every other book ever written about kids with cancer that Green is apparently trying to transcend.

And then, the dialogue. Oh, the dialogue. A few lines made me chuckle, like when Hazel says “I didn’t tell him that the diagnosis came three months after I got my first period. Like: Congratulations! You’re a woman. Now die.”

But overall, Green tries way too hard to be funny, like he is trying to imitate how teenagers talk, with all the “whatevers” and quippy asides, rather than actually inhabiting them. Similar to the “witty banter” between Dawson/Pacey and Joey on Dawson’s Creek, the back-and-forth between Augustus and Hazel, at least to me, is just so contrived in that overly intellectual, obviously scripted kind of way.

For once, I’d like to read a YA novel where the dialogue doesn’t feel forced or unnatural—like only people in books or movies would speak this way.

And to those who’d like to fight me on this, I present this line, courtesy of Augustus while playing a video game: “Sadly, the bridge is already under insurgent control due to questionable strategizing by my bereft cohort.” Lines like that take me out of the novel completely, because they smack of artificiality. I repeat: not even the most insufferably precocious teenager on the planet talks like that.

To an extent, I understand John Green’s purpose with the heightened dialogue. Green cares about these characters and wants to show that they’re intelligent, perceptive teenagers who are “too smart” for the usual Sick Lit narrative. I appreciate that the book wants to be different.

The problem is that for a book that wants to “keep it real,” everything feels so artificial and canned. I didn’t believe one goddamn thing that happened in this book or a single word that came out of Augustus’s mouth. He didn’t feel like a character, just a John Hughes facsimile.

I don’t think a book should necessarily have to make its characters talk the way real people talk, and I could see someone complaining that they “talk like adults” or graduate students. But the problem is that they talk like no one in the history of the universe talks, and Green can’t even be consistent with how his leads are written. In one passage, Hazel is going on about relativity, in another she’s explaining to us what The View is. It doesn’t make any fucking sense. But what bothers me more is that the book constantly explains its themes to you, holding the reader’s hand to tell its YA audience what it’s all about. If John Green really thinks kids are smart, why does he think they need a book to be its own Sparknotes?

Totally. In an interview for The Guardian, Green spoke about how he thinks criticism of the novel is “condescending” to teenagers.

But really, I found The Fault in Our Stars to be condescending to the reader’s intelligence, in its own roundabout way. I believe Green’s intentions were good, but every twist and turn rang manipulative and played out. We’ve read books and watched films just like this before; a recent example would be Now Is Good (book and Dakota Fanning film). None of these ideas are new, or particularly original.

If Green wants to challenge readers, and not dumb them down, better to do it with a strong story and characters that are truly three-dimensional, not just wordy dialogue to make them seem more interesting.

I agree 100 percent on Augustus. For all of his intellectual musings, he felt like a badly drawn caricature of a person. I liked Hazel a bit more, but I continually found myself wishing that I could jump into Hazel’s favorite book, An Imperial Affliction instead. Maybe I’m alone in this, but what little was revealed about that book seemed a heck of a lot more interesting than The Fault in Our Stars.

You were alone. An Imperial Affliction also sounded terrible (it reminded me of the purple prose-ridden A Winter’s Tale), but at least it wouldn’t have Augustus in it.

A lot of books have a problem of just being about the wrong characters. I wanted this one to be about Peter Van Houten or (SPOILER!) just let Augustus die quicker. Hazel can fend for herself.

I might (probably) be alone in this too, but I would have preferred a romance between Isaac and Hazel over Augustus and Hazel…or, better yet, no romance at all. Perhaps that is asking too much, though. YA novels must have romance, it seems.

The Hunger Games is refreshing exception in that romance takes a back seat, and its not the main focus. The Fault in Our Stars focused too much on Hazel’s devotion to Augustus, and not enough to the betterment of herself. That disappointed me a bit.

It did me, too. I think Green does an intermittently great job with Hazel, making her a complex character, rather than just a Sad Dying Girl or a Cancer Rebel. Some days she wants to fight, other days she can barely get out of bed. But I think that Green often struggles with establishing a consistent writing style, but when it comes to a teenage girl, that makes sense. There’s no such thing as consistency when you’re 17.

But still, some of the tonal shifts were so incredibly jarring that I wondered if he learned how to write from Ryan Murphy. If Glee needs staffers for next season, Murphy should enlist him immediately.

Well, I wanted to like this book; really, I did. But Time hailing it as “damn near genius” made me shake my fist at the sky. Disclaimer: I’m not anti-YA novels. I loved The Spectacular Now. I like The Hunger Games. But I absolutely hated The Fault in Our Stars.

Mine is that I’m officially dreading the movie adaptation. Can I just hit the eject button on that one? I want good things for Shailene Woodley.

Me too! I think she is very talented and adorable. I want better things for her in this life. Speaking of, do we dare to read Divergent next week?

I’m into it. I kind of want to see what the “kids” are into these days. It’ll be like that time I watched High School Musical, except not incredibly horrible.

Watching High School Musical in 2014 is a simultaneously horrifying and hilarious experience in which I encourage everyone to partake.

And with that passionate recommendation, I leave you all to Netflix High School Musical immediately. Thanks for joining us, book nerds. We’ll see you next week when budding hormones save us all from totalitarianism.

Photo via TheNerdDilettante/Flickr (CC BY 2.0)