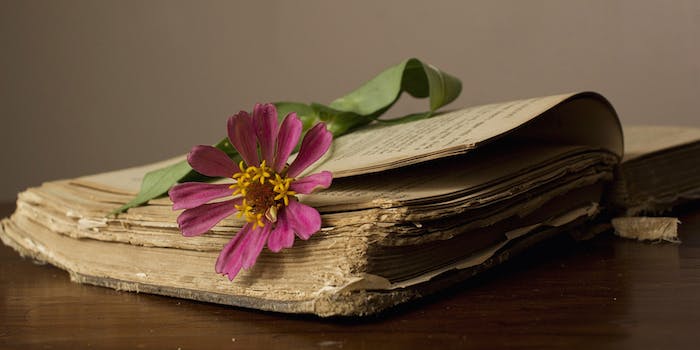 In this hangout, we discuss Americanah, by Beyonce favorite Chimamanda Ngozi Adichie.

BY NICO LANG AND LEAH PICKETT

Hello, Internet! My name is Nico Lang, Opinion Editor at The Daily Dot and your loyal co-host of LitChat, a weekly discussion about books

You’ll find us live every Friday on the site, where you can follow along, vehemently disagree or do whatever else it is that people do in comment boards.

And I’m Leah Pickett, contributor to The Daily Dot and Nico’s LitChat partner-in-crime.

For our first LitChat on the site, we will discuss Americanah, the third novel from Nigerian author Chimamanda Ngozi Adichie. Americanah won the 2013 National Book Critics Circle Award, and will soon become a film, rumored to star recent Academy Award winner and Hollywood “It” Girl, Lupita Nyong’o.

First thoughts after finishing the book? I have so many feelings.

I think I’m still processing, but I have the impression that I just read five different books. That’s not a knock against Adichie. I think it’s one of the more ambitious and accomplished books I’ve read in a long time, like a beautiful hybrid of Zadie Smith, Arundhati Roy and Marcel Proust.

Roger Ebert once described the film Synecdoche New York by saying it was about everything. This is the same. It would be simpler to say what it isn’t about than what it is. Adichie’s writing contains multitudes, the whole of three continents in one book.

TL;DR I loved it.

Yes! Adichie is masterful in her weaving of three countries, America, Nigeria, and Britain, and, essentially, two stories—the both distant and intertwining paths of our main characters, Ifemelu and Obinze—into one story, cohesive and intimate, but also sprawling and epic at the same time. I didn’t want to stop reading, but many times I did find myself putting down the book, just to go for a walk and process the rollercoaster of emotions.

The book is centered around the love story between Ifemelu and Obinze, but it’s really about the dissection of race, and self-discovery, longing and loneliness.

Which theme did you find yourself most drawn to? Was there a passage or a moment that struck you as particularly honest, raw, true? I experienced many of those lightning-strike moments, too many to count.

For me, if I had to pick out an overarching theme of the book, I don’t know if it was about love for me. I think it was about wanting to feel home somewhere, a connection to what makes you feel most yourself. I don’t think it was about self-discovery at all. What I loved most is it’s rumination on feeling like a stranger wherever you are, which Adichie describes as endemic of Nigerian youth. You’re told you can’t begin your life until you move elsewhere, because living in Lagos isn’t a life, but when you get there, you’re forever an outsider, marked by difference.

What I loved most were the passages where the book just becomes a sea of conversations about identity, seeing the ways in which Ifemelu is forced to negotiate an identity she doesn’t understand. I love that Adichie says that she didn’t know she was black until she came to America.

It’s such a powerful idea. You aren’t anything until people tell you what you have to be, how they are willing to define you. Some of my favorite moments are Ifemelu learning how she’s supposed to react “as a black American” to racism or prejudice. This is what’s expected.

Adichie, who has mentioned that many of Ifemlu’s experiences mirror her own, examines blackness from an immigrant’s standpoint, from a country that she escaped not because of the assumed reasons, war or famine, but the burden of choicelessness.
That is, Ifemelu has aspirations of the American Dream, but realizes that so much of her life in Nigeria is strangely echoed in the places she inhabits after her move: Pennsylvania, New York, New Haven.

When she returns to Nigeria, “Americanah” is used as a mocking term for her. But really, everyone is still chasing that ideal, that dream of choice.
I also love the scene when a Nigerian school puts on a Christmas play with snow falling, and one of the mothers wonders why. Why are the children here raised to believe that Christmas should have snow, like in Britain and America? Why is the Nigerian curriculum not sufficient, and the English curriculum preferred. I love the ways in which Adichie explores all of the parallels and inconsistencies.

It parallels a scene early in the book where a boot that has been abroad is worshipped, simply because it touched snow. Adichie does such a great job of showing how torn Nigeria is about Westernization, like an addiction it knows it should kick but cannot. You see it in Obinzie’s love of Huck Finn and the way one of their schoolmates feigns an American accent after having visited America just a short while. And that internalization sticks, a sense of cultural inferiority or shame.

For Ifemelu, it seems to be a double shame. She’s going through the process not only of feeling pride for her own culture but a complicated romance that mirrors her Aunty Uju’s, a woman whose life both attracted her and repulsed her. She loved her Aunt, but not for who the general made her or the woman she became later in life. The novel is about choices, but it’s ending shows, that casual acceptance of opening the door to what feels like fate, sometimes your choices choose you.

There’s a sense of almost inevitability and resignation to the narrative. It could only end this way, with a trial of almost destruction in the wake of both Obinze and Ifemelu. In another novel, it would have felt like a melodrama, but here it just feels symbolic.

Absolutely. It’s also telling that both Obinze and Ifemelu are drawn back to the place where they began, and back to each other. I was so drawn to theme of putting on identities that don’t belong—Obinze’s sham marriages #1 and #2, Ifemelu torturing herself with relaxers and then rejecting that construct, embracing her natural hair, her true self—and then returning to one’s roots in re-examination.

Adichie’s descriptions and observations are so acute, not just about race and blackness, but liberal elitism, education, and class. She gave me reason to pause, to re-examine myself as a white woman, a neighbor, a sister, lover, and friend. When a writer opens you up into examining your place in the world, and your ripple effect on every person around you, then you know the work is important, and deserves to be read by as many people as possible. That’s my takeaway.

Also, a film is only in the teasing stages at this point, but I’m keeping my fingers crossed! How amazing would it be to see Lupita Nyong’o in the lead?

I almost wish that I didn’t know she were up for the part, because I couldn’t see Ifemelu. I just saw N’yongo’s face. It was really distracting, actually.

I’m a little concerned about the adaptation, though, I have to say. I just don’t know how they can possibly tackle a book like this. There’s frankly too much in it. Americanah practically overflows with characters, so much so that I was constantly convinced the book was going to go off on a tangent and become about one of its side characters. It’s so well drawn that anyone in Americanah could get their own book. I’d love to see Nigel’s novel next. That would be a fascinating read.

We’ll have to hold out for Americanah II: Nigel’s African Voyage.

That’s about all we have for today. Thanks for joining in, everyone! Make sure to pop by next week, after we (hate) read John Green’s The Fault in Our Stars. I’m just kidding, John Green fans. I really want to like it.

I’m so excited to read this YA explosion. I can’t even.