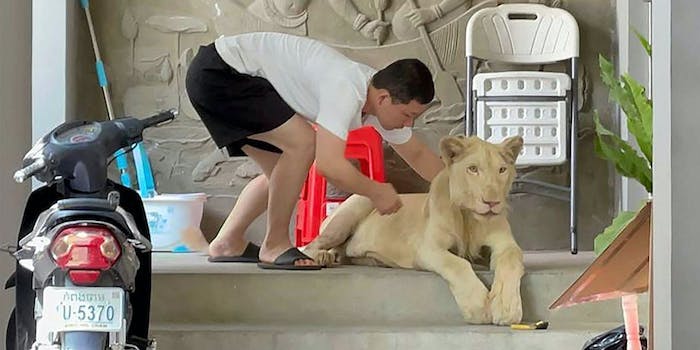 The lion was illegally brought into Cambodia.

Months after appearing in several TikTok videos, authorities have removed a male lion that was being raised in the home of a Chinese citizen, the Cambodian environment ministry announced.

“Cambodian authorities started investigating this lion since we saw it on TikTok in late April,” Cambodian Pheaktra, a spokesman for the Cambodian environment ministry, said on Sunday. “People have no right to raise rare wildlife as pets.”

Pheaktra also revealed that the declawed male lion is 18 months old, and weighs 70kg (154lbs). The lion was brought into the country from overseas, which is illegal in Cambodia. According to the owner, the lion was being fed 6kg of meat every day.

While Pheaktra said the investigation into the lion had been ongoing since April, a viral tweet posted last week that included an aerial view of the lion brought even more attention to the lion.

The Wildlife Alliance, an international non-profit organization that is dedicated to forest and wildlife conservation that operates in Cambodia, took part in the rescule alongside the Forestry Administration and Cambodian authorities that included the Deputy Prosecutor of the Phnom Penh Municipal Court, and both the police and the military police.

The organization highlighted how a residence is an unsuitable environment for a lion, especially one that has been declawed and defanged.

“The owner had removed the lion’s canine teeth and severely clipped his claws,” the Wildlife Alliance stated in a blog post about the rescue. “Such modifications can dramatically reduce wild cats’ quality of life.”

According to reports, the owner of the lion posted a photo of the lion in a driveway close to a dog playing. In one video shared, the lion—which was much younger at the time—is seen getting sprayed with a hose.

The lion has been taken to the Phnom Tamao Wildlife Rescue Centre, where it is being taken care of by the Cambodian Forestry Administration.

“The Chinese owners have been called in by the authorities to stop raising such wildlife.” Koam Seiha, Director of Phnom Penh Forestry Cantonment, said in a statement.

It’s unclear if the owner of the lion will face charges for obtaining and keeping the lion.