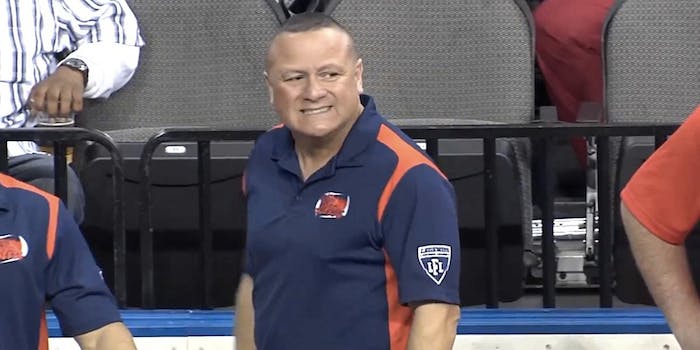 The Legends Football League (née Lingerie Football League), in which bikini-clad women play tackle football for your confused enjoyment, has an interesting new promotion on YouTube.

It’s a video of a coach, in an example of “intensity,” proclaiming to one of his players “I’m gonna f**k you in the face!”

That’s head coach Keith Hac, who leads the Chicago Bliss. The LFL has decided to highlight him in the latest clip uploaded to its YouTube channel, titled “Intensity of LFL coaches.” Previous episodes highlight players’ toughness and what they did when they went to Mexico.

But telling players of an impending sex crime is different. Hac swears multiple times in the clip, including four uses of the word “f**k.”

“Goddammit! F**k! Goddammit!” he says in another clip.

The sole bleeped word, however, is that “f**k” from “I’m going to f**k you in the face!” Presumably, it was beeped because that one implies sexual assault.