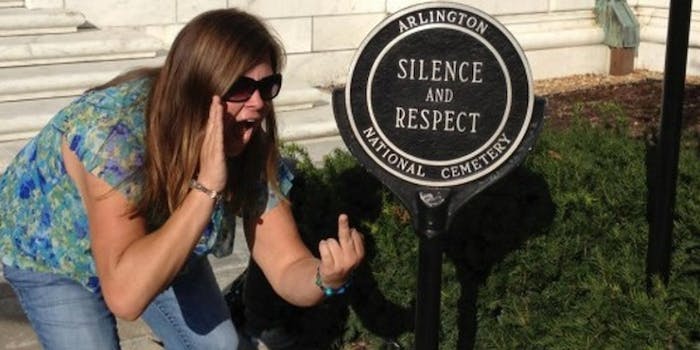 Should this woman have her life ruined for a stupid Facebook page?

Lindsey Stone has tried to apologize for an inappropriate photo she took at Arlington National Cemetery last month, but that has done little to silence her critics.

While visiting Arlington National Cemetery last month, Lindsey Stone thought it would be amusing to snap a photo of herself “disrespecting” the Tomb of the Unknown Soldier by flipping it off and pretending to make noise.

She later uploaded the photo to her Facebook page, thinking her friends would get a kick out of it as well.

To her chagrin, many of the comments she received were decidedly unsupportive of her shenanigans, so she decided to try and nip the outrage in the bud by posting a mea culpa of sorts.

“Whoa whoa whoa… wait,” Stone wrote on October 20th. “This is just us, being the douchebags that we are, challenging authority in general. Much like the pic posted the night before, of me smoking right next to a no smoking sign. OBVIOUSLY we meant NO disrespect to people that serve or have served our country.”

The uproar seemed to die down for a minute, but soon enough the photo found its way to someone with enough time to take the indignation to the next level.

A Facebook page called “Fire Lindsey Stone” was created less than a day ago and has already amassed over 4,000 likes. Started by a former servicemember, the page calls for Stone to be terminated from her job at LIFE, a Cape Cod-based nonprofit that houses adults with learning disabilities.

“Let her employer know how much of a waste of oxygen this disrespectful person is,” wrote the page’s creator, who notes that Stone’s trip to Arlington National Cemetery was paid for by the organization.

Unable to ignore the flood of comments from irate anti-Lindsey Stone activists, LIFE released the following statement a few minutes ago:

On Nov. 19 at approximately 6 p.m., we became aware that one of our employees had posted an offensive, inappropriate photograph on her personal Facebook page. The photo was taken at a national historic site in October by a fellow employee during a trip to Washington, D.C. attended by 40 residents and eight staff. The photo has since been removed from Facebook, and both employees have been placed on unpaid leave pending the results of an internal investigation.

This photograph in no way reflects the opinions or values of the LIFE organization, which holds our nation’s veterans in the highest regard. We are proud to have veterans serving on our staff and board of trustees, and we value their service. The men and women who have selflessly fought and sacrificed their lives to protect the rights and lives of Americans deserve our utmost respect and gratitude. We are acutely aware that this photo has done a disservice to veterans and we are deeply saddened that it was taken and shared in a public medium.

The most important question that must now be asked is “does Lindsey Stone deserve to have her future employment imperiled — at LIFE or elsewhere — because of an admittedly dumb photo posted in jest on her personal Facebook page?”

On Fark, where the topic has incited heated debate, one user decried America’s “out of control military worship.” Another user retorted that it wasn’t military worship “to show a little goddamn respect once in a while.”

Meanwhile, Stone has deleted all of her Facebook posts save for a few friend requests. It seems unlikely that she will issue another statement, but, at this point, would the Internet even care what she had to say?

By Neetzan Zimmerman; photo via wizbang