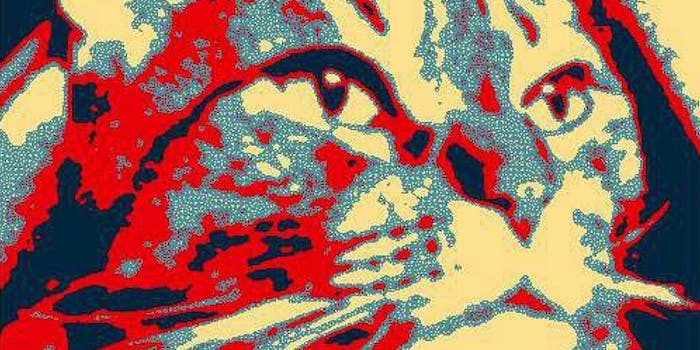 Our favorite 2016 presidential candidate is a cat named Limberbutt McCubbins

Here’s a quick test. Which of the following is running for president in 2016?

e) All of the above

If you answered E, you get an A, because the following people are, in fact, campaigning to become the most powerful person in the free world: Gilmore, a former Virginia governor; Lynch, a businessman and political analyst; Chafee, a former Rhode Island governor who has no chance to beat Hillary Clinton in the Democratic primary; and McCubbins, a dude from Louisville with a cool name.

Oh, and McCubbins is also a cat.

What’s that, you say? McCubbins can’t run for president because he’s a feline?

Also, pigs and dogs have run for president before—seriously, they have—so why not a cat?

But let’s be serious for a minute. How did his happen? Why is a cat trying to secure the Democratic nomination? Does Limberbutt not believe in Clinton? Does McCubbins think a cat can actually amass enough votes to defeat Jeb Bush or a Scott Walker?

The idea of running a cat sprang from the mind of 17-year-old high school student Isaac Weiss, who thought it would be hilarious to have the pet of his friend, Emilee McCubbins, take a shot at the presidency.

Last spring, Weiss created “The Committee for the Installation of Limberbutt” on the Federal Election Commission‘s website, officially registering Limberbutt as a Demo-cat.

Limberbutt is only 5 years old, which would disqualify him for the presidency. But if we count Limberbutt’s age in cat years, he’d be about 38, making him is constitutionally eligible.

Some people apparently believe this entire enterprise is a serious venture.

Weiss and Emilee McCubbins say they have already gotten letters about Limberbutt’s candidacy — some going as far as to ask for proof of the cat’s citizenship. Other letters are seeking information about possible volunteer opportunities to help get McCubbins in the White House.

“I got a letter in the mail from a lawyer wanting to represent him,” McCubbins told WFPL News. “I’ve gotten numerous emails.”

Weiss added: “It does not appear that they know that he is indeed a cat.”

But in doing additional research on Limberbutt’s social media accounts, we have discovered that McCubbins’ owner’s friend is telling the truth. A cat he is, and a cat is what he always shall be.

#LastRelationshipTaughtMe That it's time for a new type of president! #MeowIsTheTime

Limberbutt is even getting the requisite local TV coverage and making merchandise that will hold either your coffee or your milk.

Does McCubbins inspire you to rock the vote? If nothing else, he’s better than Donald Trump.