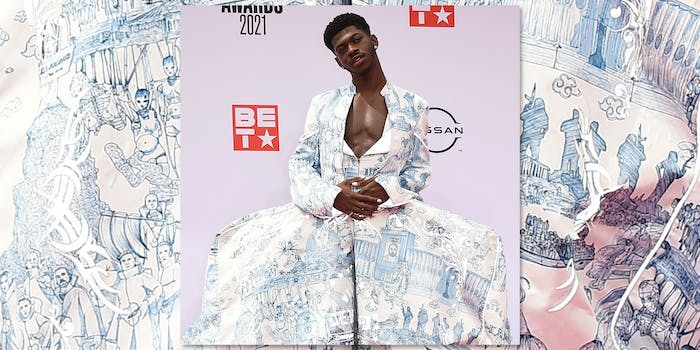 ‘We causing the emasculation of men all 2021’: Lil Nas X shuts down homophobe who made fun of his BET Awards outfit

Lil Nas X took his fashion up several notches during the 2021 BET Awards.

According to Page Six, while on the red carpet on Sunday, “the 22-year-old Grammy winner truly outdid himself in a dramatic oversized gown from young designer Andrea Grossi. Comprised of a larger-than-life bustled skirt, a zippered corset, suspenders, and a matching jacket, the gender-fluid look also featured a toile-style print that referenced themes of war and religion — a perfect pick for the eyebrow-raising rapper.”

However, some homophobes online weren’t as appreciative of the look, and Lil Nas X wasted no time shutting them down.

“I’m sure he was paid a million dollars to wear this nonsense. This will cause other little boys that admire him to dress this way for free, and I hate seeing men emasculated,” one said of the red carpet look.

“We causing the emasculation of men all 2021,” Lil Nas X swiftly responded.

Another accused Lil Nas X of disrespecting African history and culture during his ancient Egyptian-inspired performance of “Montero (Call Me By Your Name),” in which he kissed a male dancer.

“Y’all really like to pretend homosexuality didn’t exist in African culture,”‘ he said in response.

This sparked a conversation about the history regarding African interaction with imperialist agendas and the possibly queer lives of people living in ancient African countries.

Factually, it is widely understood by scholars that sexual/gender fluidity was the norm in many African cultures across the vast continent. It wasn’t until European involvement (specifically Christian indoctrination) that notions of gender normativity and sexual orientations infiltrated African life in scale.

Lil Nas X, though, is more agitated about the seemingly fake surprise coming from some viewers. He pointed out, “like the song is literally about gay sex, what y’all want me to do[?] play the piano while baking a cake?”