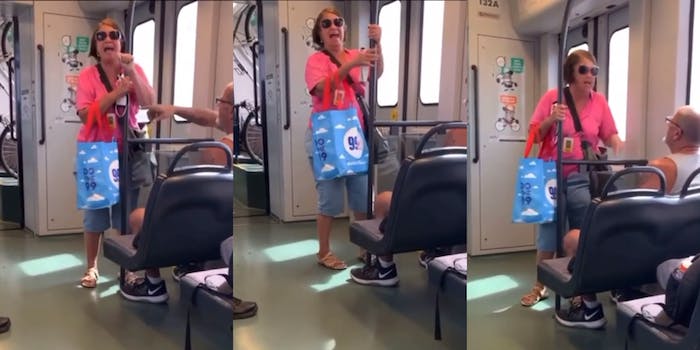 'You're spitting everywhere, and you've got blood coming out of your mouth.'

A viral Reddit video shows a racist “Light Rail Karen” in Arizona in a wild episode on a commuter train, verbally abusing every passenger within sight.

While riding the Valley Metro Rail, in Tempe, a woman came onto the train upset. She’d already taken off her mask or didn’t have it on when she arrived.

The anonymous videographer knew a Karen situation could be brewing and instantly started to record Karen’s belligerence—given she had on the “Karen” uniform: capri pants, short-cropped/bobbed hair, lousy (possibly racist) attitude, and a fixed belief that everything and everyone serves her. Check, check, check, and check.

The first words heard were hers. She spat some gibberish, and then, “I wouldn’t have had to wait in the goddamn sun for 20 minutes!” toward a Black security guard.

The security guard, who visibly had enough, said something inaudible and walked away. Then, Karen turned, commenting about his education and said, with heft, “If you had one, you wouldn’t be working for 10 dollars an hour for the bus company, you n*****!”

The guard approached her about the slur and told her she had to get off the train. The videographer spoke up: “Oh no, you’re not going to do that. You’re not gonna call somebody that word. I don’t care who it is.”

“I don’t care who you are, n*****!” she replied, clearly experienced with the racial slur.

Because the videographer likely had on Arizona State University gear, Karen then went on about how the Tempe school is a “shithole.” She claims she went to Stanford and the University of California at Berkeley, has a master’s degree, and speaks eight languages.

The man seated in front of her also had enough, asking her to turn away from his direction. She declined, accusing him of sneezing.

The videographer says: “If you knew nine languages, you wouldn’t be riding this train.” She short-circuits and calls him a “fucker,” trying to catch her own drool.

The security guard cautions her: “You’re spitting everywhere, and you’ve got blood coming out of your mouth.”

Many of the commenters in the Reddit post note the guard’s professionalism toward Light Rail Karen, given the situation. The comments about her education, classism, and racism were also plentiful.

“I love when these Karens claim they’re educated but are completely lacking in social awareness,” wrote u/ThereWolves. “Education means nothing when you are this far-gone from being a decent person.”