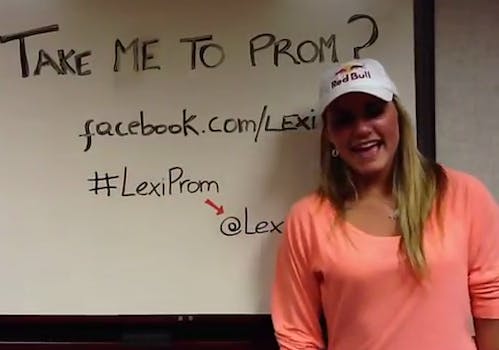 Your clever application can have you pinning a corsage on Lexi Thompson, but only if you wear a uniform.

Usually non-celebrities ask famous people for dates. The latest Internet-prom story does the reverse. On April 24, the youngest golfer ever to qualify for the US Women’s Open uploaded a YouTube video seeking a date for her May 18 prom in Florida.

High school student Lexi Thompson—wearing a hat from her sponsors, Red Bull—said she is looking for “somebody special and somebody I can respect.” Therefore, she’s looking for someone in the US military, a man between the ages of 18 and 20 (that age range was most likely set by the school, not Thompson herself).

Anyone interested should visit her Facebook fan page, “upload a photo of you, and explain why my fans and I should choose you as my date. And, on top of all that, you get a free trip to Fort Lauderdale and to go to prom with me.”

“Hey Lexie my name is Brennan Gunville,” one hopeful wrote. “I am in the us army reserves. I currently live in Illinois and attend collegr in Bloomington Icompos i’m 20 years old! I have played golf pretty much my whole life! Also the town i’m from hosted the lpga statefarm classic I would love to accompany you for your prom this year! Can’t wait to hear from you!!”

Another applicant posted a photo of himself in a Navy uniform. “Hi Lexi, my name is Brian Sibley…I am a respectful, handsome, and spontaneous guy. I would love to enjoy the night out on the town with you. I am originally from Chicago and now reside in San Diego, Ca. Prom can be one of the best days of your life and I would humbled at the opportunity to be your date at Prom.”

Ian Lopez did not apply for a date, but made a suggestion: “Lexi, I think that is great thing you are doing for our young warriors […] I recommend taking one of our young wounded warrior regardless of branch of service. No one says you can’t take two or three.”

Thompson didn’t specify a preference for any particular branch of the military—Army, Air Force, Navy, Marines, or Coast Guard—but some commenters on her Facebook page did their best to stir up intra-branch rivalry. Alex Hill said “Soldiers? I’m 6 foot, 19 and a Marine, sign my ass up for this. I will be so mad if some hooah [a rude slang term for U.S. Army personnel] gets to go”.

Glenn Henderson called Hill to task for not recognizing that all members of the military are equally superior: “alex no disrespect but you comment makes it sound like you dont see the different branches as equals when we are all the 1 percent”.

Thompson’s invitation might make some members of the U.S. military very happy, but civilian Winston Urwiller was probably disappointed to see it. Three days before Thompson released her video, Urwiller uploaded a YouTube video of his own, a five-minute masterpiece titled “Lexi Thompson Go To Prom With Me?”

One commenter showed wry sympathy when he told Urwiller to expect rejection: “Bro if only you were in the military haha, this is awesome!﻿ Hands down best prom request i’ve ever seen…”

Thompson hasn’t announced the deadline for her prom-date applications, though it will certainly be sometime well before May 18. If you’re in the military, too young to drink alcohol, and hope to be Thompson’s prom date, you’d better get your application in soon.