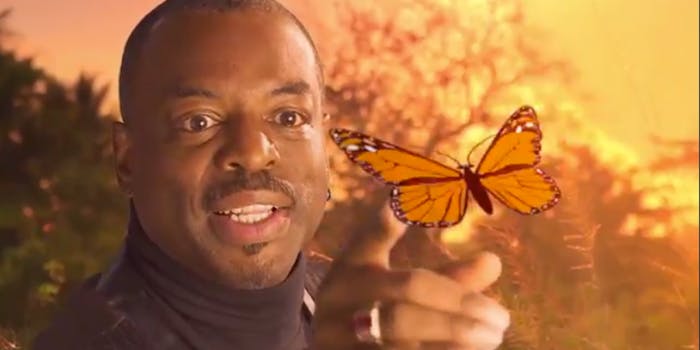 This updated ‘Reading Rainbow’ song gets a little dark

He can literally do anything.

Maybe we shouldn’t have been so quick to fund LeVar Burton’s Kickstarter project.

The actor’s plan to bring back Reading Rainbow online and in classrooms reached its initial $1 million goal in less than 12 hours, and it’s since raised over $3.4 million with 28 days to go. To celebrate the already historic achievement, Burton teamed up with Funny or Die to update the over 30-year-old theme song.

What starts out as the tune we’ve all heard countless times quickly takes a dark turn (without any help from DMX). Burton may seem like he wants to promote reading, but really he just found a way to use the power of reading for his own good—which might not work out as well for books everywhere or the rest of us mere mortals.

He can literally do anything now, and it’s all because he read a book.

No man should have power like this. Even LeVar Burton.