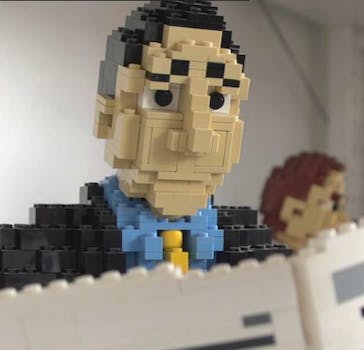 Tumblr presents a look into the life of a "Lego Certified Professional."

Brooklyn resident Sean Kenney’s day job is as much avocation as vocation: He’s an artist who builds and create sculptures with Lego bricks. Kenney, who has studios in Queens, is a “Lego Certified Professional”—a designation currently bestowed on only 12 other people worldwide. His creations range from life-size mosaics to 10-foot-tall buildings and just about everything in between.

“I’ve been doing this since I was two years old,” says Kenney. “I was the Lego maniac when I was a kid. It was all I’d ask for for my birthday.” Even when he left for college, Kenney says, “I took my big bin of parts with me, and I dumped them out on the floor in the dorm room.”

Kenney took his hobby all the way through his first jobs in the tech sector. “I sat at a desk for 10 years, and I would go home at the end of the day—sometimes still in my suit—and sit down and build stuff. It was my release. Somewhere along the line, I decided I should merge my passion for the arts with my hobby, quit the day job, and do that instead.”

The first Lego model he built as an adult was a 40,000-piece city, stashed away in a basement. Today, he’s built sculptures for a broad swath of companies, from a little-known search engine to a television show starring the author of Bossypants.

Now Kenney has taken his show on the road. His traveling exhibit, Nature Connects, comprises butterflies and bison, frogs and farmers, all life-sized and each made from Lego bricks. It debuted at Iowa State University’s Reiman Gardens this year, and the show is scheduled to travel around the country through 2015.

One of Kenney’s long-term projects, MOCPages—a place for adult fans of Lego, or AFOLs, to share their creations—will turn 10 next year. In a sense, it was a predecessor to Facebook and Tumblr, featuring photo posts and comments “before there were social networks or any of that stuff.” Today, MOCPages is an online showcase for tens of thousands of fans around the world.

Kenney now sits amidst two million pieces of Lego at an artists’ building in Long Island City, sharing space with his staff and a traditional sculptor, with commissions coming on a regular basis. He recently released his latest children’s book and is making his first foray into high-end interior decorating with a line of lamps made out of (shockingly) Legos. “It’s a really great feeling to do something you love as a job,” Kenney says.

As for what got him here, it might have all been in the genes. Kenney’s father collects model trains, and his mother teaches preschool. “I like to think that if you take a pre-school teacher and a model railroader and they get married and they have a kid,” Kenney laughs, “you get me.”